Full Tilt Poker is running its “Take 2” promotion again from this Friday in an attempt to get more players to return to its cash game online poker tables. 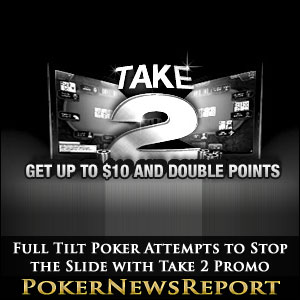 Full Tilt Poker is running its “Take 2” promotion again from this Friday in an attempt to get more players to return to its cash game online poker tables.

Full Tilt Poker has slipped behind the iPoker Network and 888Poker, and is now the fourth most popular online poker site for cash games behind PokerStars. In an attempt to address its loss of players, the site is running a “Take 2” promotion from this Friday through to Sunday October 6th.

The “Take 2” promotion enables players to earn double Full Tilt Poker Points at all times of the day (triple points during “Happy Hour”) by playing on Rush poker tables or at two or more standard cash games tables simultaneously. The points earned can be exchanged in the Full Tilt online store for tournament tickets or ring game tickets once they have been added to a player´s FTP points balance.

Cash bonuses will also be available during the “Take 2” promotion for players who log in regularly and play Rush Poker or at two standard cash game tables at the same time.

To take part in the promotion, earn the double FTP Points and the cash bonuses players must elect to participate in Take 2. This is done by logging into your Full Tilt Poker account, clicking on the red cashier button and following the link which will appear in the “My Promotions” box. Players will be able to track their progress throughout the promotion through the “My Promotions” box as well.

The timing of the Take 2 promotion is particularly good for micro and low stakes tournament players who will be able to exchange the bonus points they acquire throughout the promotion for entries into the Micro Turbo Online Poker Series (MTOPS) which starts on Sunday 13th October – one week after the Take 2 promotion concludes.

MTOPS will feature seventy-five tournaments with buy-ins from just $0.55 and guaranteed prize pools totalling $1 million. The series will also have its own leaderboard competition and multi-entry challenge, while Full Tilt Poker professionals will also be competing in selected events with $100.00 bounties on their heads. The $15.00 buy-in MTOPS Main Event takes place on Sunday 27th October at 14.00ET and has a guaranteed prize pool of $500,000.