Online poker site Full Tilt Poker is still not paying back its American customers following the events of ‘Black Friday’ in mid-April, when the US Department of Justice (DoJ) shut down several prominent poker sites and froze accounts. 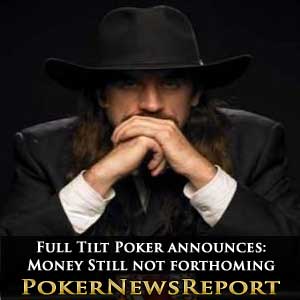 Online poker site Full Tilt Poker is still not paying back its American customers following the events of ‘Black Friday’ in mid-April, when the US Department of Justice (DoJ) shut down several prominent poker sites and froze accounts.

While some funds have now been unfrozen, they are still not available to be accessed by American players after the DoJ also shut down Absolute Poker and PokerStars while also arresting many of the companies’ founders on charges of fraud, bribery and money laundering.

American players are still not permitted to access these poker sites, but obviously want their money returned – but it looks like Full Tilt customers will have to wait just a little longer before that is possible.

The past few days have seen at least one key account become unfrozen, but Full Tilt Poker have just released a statement which says that “we still do not have a specific timeframe for this” release of funds.

But it’s not all been bad news for Full Tilt Poker as more poker sites have been shut down in the USA, with the website’s The Poker Lounge poised to make an incredible recovery – much in the style of Lazarus returning from death – after being cancelled shortly after the shocking events of April 15.

The TV series – featuring a mix of big-name professionals and Internet qualifiers fighting for a $120,000 top prize in Wales – seemed to have sunk without trace in April following organisers’ alleged inability to supply production firm Presentable with an expected bank transfer.

However, it has emerged – from a joint statement – that Full Tilt and Presentable anticipate filming of the 10-episode show to start very soon.

Additionally, and somewhat surprisingly, the companies pointed out that they have experienced an “honourable and mutually beneficial partnership” over the years.

The new series of The Poker Lounge is scheduled to be shown on British TV station Channel 4 each Monday, from July 25 to September 26.