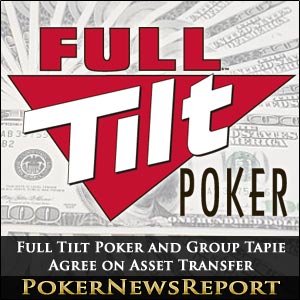 Transferring the assets is the latest step in the acquisition agreement paving the way for players with frozen account balances at the poker site to be repaid, Subject: Poker has reported.

With the U.S. Department of Justice (DoJ) acting as middleman in the deal, GBT is actually acquiring the Full Tilt assets from the DoJ for $80 million, who have “agreed to dismiss the civil complaints for forfeiture against the FTP companies.” Although the charges against FTP as a business entity will be dropped as part of the agreement, charges against individual FTP board members Howard Lederer, Chris Ferguson, Rafe Furst and Ray Bitar have not been dismissed and must still be defended.

As was widely reported last month, payment of funds to U.S. players, an estimated $150 million, will fall under the responsibilities of the DoJ, while reimbursement to poker players throughout the rest of the world will be undertaken by GBT. When the cashout distributions will commence has not yet been announced, pending the actual transfer of assets and the DOJ’s dismissal of its civil forfeiture charges against FTP.

Full Tilt owners reportedly voted on the agreement and a majority of shareholder representation approved the deal. Current FTP owners will be able to receive equity in the new GBT-controlled company, but are limited to purchasing minimal shares and will remain passive owners with no control in management decisions and no voting privileges.

It is expected that U.S. players who are owed money by FTP will have to file claims directly with the DoJ for reimbursement once the DoJ announces that such a process will commence. No timetable for reimbursement has been forthcoming, but, according to Sanford Millar, an attorney based in Los Angeles who represents gaming clients, “the process for player claims will neither be simple nor speedy.” Millar added that U.S. claiming players will have to, among other things, have detailed records of their deposits and withdrawals at the site, show “compliance with federal income tax laws,” as well as verifying the “source of funds for all deposits.”

Apparently, GBT is ready to get their feet wet as a poker operator and is confident that the final steps to purchasing FTP will continue unabated as they have already applied for a license to run an internet gaming site in Spain. With just hours remaining in the deadline for applying to the Spanish regulating body, GBT submitted a bid and may know before Christmas whether their application has been approved.