News has just been released by the Alderney Gaming Control Commission that next Monday´s rescheduled hearing to question Full Tilt Poker on the allegations made in the FBI indictment of Black Friday is to be heard “in camera”. 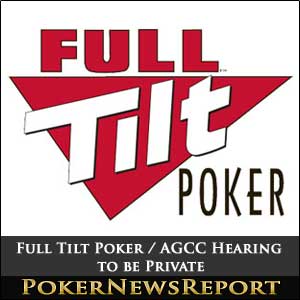 News has just been released by the Alderney Gaming Control Commission that next Monday´s rescheduled hearing to question Full Tilt Poker on the allegations made in the FBI indictment of Black Friday is to be heard “in camera”.

In a brief announcement posted on the AGCC web site, it was revealed that Full Tilt Poker had also requested a further adjournment – an application which was denied in “the interests of the various parties”.

The announcement comes as a shock to many people who were already preparing to travel to the Riverbank Park Plaza Hotel on Monday – a venue which had been specifically chosen to cater for the anticipated large volume of “interested parties” – and reaction was swift and scathing with claims that the AGCC had been negligent in their own actions and did not want this raised in public.

The Full Text of the AGCC Statement

The Commissioners of AGCC forming the tribunal dealing with the regulatory hearing into the affairs of FTP have decided that the hearing will continue on Monday 19th September 2011 but that it be held ‘in camera’. This determination was reached following a pre-hearing application by FTP to further adjourn the hearing.

“I am pleased that the FTP hearing will continue as scheduled, as was argued on my behalf. However, I am disappointed with the tribunal’s decision that, notwithstanding my arguments to the contrary, the hearing will be held in private. I believe the public has a right to know the reasoning behind the decisions to suspend FTP’s licences and call a hearing, and to hear the evidence that will be put forward on my behalf. It is my understanding that the tribunal conducted a difficult balancing exercise of the interests of the various parties, taking into account the legal arguments for and against further postponing the hearing, and for and against allowing the public to attend the proceedings.”

As a consequence of the tribunal’s decision members of the public will not be able to attend the hearing. A further statement will be made at the earliest possible opportunity.