A deal has been signed between the U.S. Department of Justice (DoJ) and Groupe Bernard Tapie (GBT) to purchase Full Tilt Poker (FTP) for $80 million. 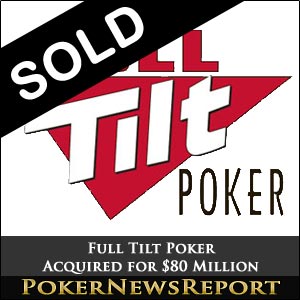 A deal has been signed between the U.S. Department of Justice (DoJ) and Groupe Bernard Tapie (GBT) to purchase Full Tilt Poker (FTP) for $80 million, but the historic deal first requires FTP to forfeit its company assets to the DoJ, which will then sell the poker site’s assets to GBT, the investment firm from France.

“This is a pretty historic agreement in many ways,” Ifrah added. “The agreement itself is signed, and it’s going to lay the groundwork for a final agreement between Tapie and the company, which will ultimately result in those assets, presumably, being voluntarily forfeited to the government.”

The agreement, which will apparently need approval by two-thirds of FTP shareholders, also stipulates that GBT will be required to pay back poker players outside of U.S. borders, and the DoJ will assume responsibility of reimbursing players located in the U.S., an estimated $150 million. Exact details are not currently known, but American players will need to apply for reimbursement compensation directly to the DoJ.

Part of the agreement calls for the DoJ to dismiss the civil forfeiture allegations against FTP, in turn, removing liability shouldered by shareholders of the company. However, the dismissal against FTP will in no way impact the proceedings against Chris Ferguson, Howard Lederer and Ray Bitar, who are named individually in the Black Friday indictments.

Another agreement stipulation allowing GBT to acquire and re-establish the beleaguered poker site is that GBT must hold a majority interest in FTP and that no current FTP board of directors can be allowed to be shareholders, but current shareholders who are not company directors will be permitted to own shares.

An attorney for GBT, Benham Dayanim, also confirmed the deal. “The next step is to obtain an agreement from the Full Tilt Companies,” he said. “I anticipate it will happen. It allows for players to be repaid, and resolves the FTP forfeiture action by the government.”

FTP’s list of U.S. poker players is believed to be part of the company’s assets, but GBT will not use that list in any way except in assisting the DoJ in identifying customers who hold unpaid account balances and are entitled to compensation, Dayanim said.