Loyal U.S. players who accumulated Full Tilt Points (FTPs) and were hoping those points would be honored in the ongoing remission process are out of luck. 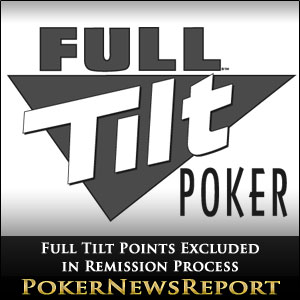 Loyal U.S. players who accumulated Full Tilt Points (FTPs) and were hoping those points would be honored in the ongoing remission process are out of luck.

Claims administrator Garden City Group (CGC) has dutifully informed players that FTPs were merely a marketing tool that have no monetary value. As such, any points or Iron Man Medals accrued as players worked their way up the ladder in the site’s VIP program will not be redeemable in the remission process and can be considered worthless.

Although this update will not come as a shock to many players, it is extremely unfortunate. When Full Tilt was operating in the U.S. prior to Black Friday, FTPs were extremely valuable and were redeemable for bonus cash and prizes. But the GCG, in conjunction with the Asset Forfeiture and Money Laundering Section of the DoJ, do not share this opinion.

Players are often swayed by the various VIP programs offered by online poker sites in choosing where they would like to play. But many other factors also are considered. Full Tilt has often been cited as having exceptional software, which also is important to a number of players.

Keep in mind that players were also flocking to Full Tilt in late 2010 and early 2011 due to Rush Poker. Full Tilt was the first online poker site to rollout the fast-fold poker concept, which allowed players to accumulate FTPs at a much faster rate. No other sites were offering fast-fold poker at the time.

But all that effort in accruing points and cashing them in will go for naught in the Full Tilt remission process. That process is about half-way done with one more month to go before Petitions for Remission are no longer accepted after November 16.

However, according to a previous update at the GCG website, some player submissions will be received by the claims administrator after November 16. Some players who have been flagged as affiliates and ineligible for participation are having their cases reviewed.

GCG is allowing certain affiliates to submit petitions as long as the account balances of those players “relates to poker transactions.”

For more information on the latest updates, click on over to fulltiltpokerclaims.com. The FAQs can be accessed on the upper left hand corner of the home page.