Nelson Burtnick entered a guilty plea in federal court for his role as payment processor of Full Tilt and admitted to deceiving banks into accepting payments. 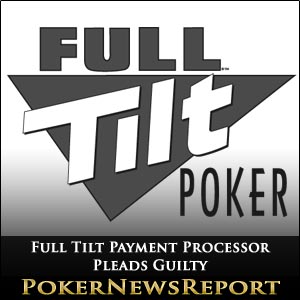 Nelson Burtnick entered a guilty plea in federal court for his role as payment processor of Full Tilt and admitted to deceiving banks into accepting payments.

The Canadian national told U.S. Magistrate Judge Gabriel Gorenstein that I know that what I did was wrong while explaining that online poker sites such as Full Tilt and PokerStars–which Burtnick also processed transactions for–set up phony Internet companies to mask the fact that online poker sites were involved and had to do this type of deception to enable U.S. poker players to load their accounts, various news wires reported.

The U.S. enacted the Unlawful Internet Gambling Enforcement Act (UIGEA) in 2006 that was designed to prohibit banks and credit card companies from allowing U.S. players to fund accounts at offshore online gambling sites. Many sites, particularly Full Tilt, PokerStars and Absolute Poker, attempted to circumvent this law and keep the money flowing from U.S. players. The scheme worked for a while, until the U.S. Department of Justice (DoJ) indicted the poker sites on April 15, 2011.

Burtnick could be sentenced to 15 years behind bars, but cooperating with prosecutors and his admission of guilt are expected to garner a much more lenient sentence. The 41-year-old will be required to forfeit funds, pay restitution, and refrain from making future claims of compensation from either PokerStars or Full Tilt. The amounts Burtnick must release have not been disclosed.

Burtnick was on the lam until surrendering to federal authorities in July, following Full Tilt CEO Ray Bitar in so doing. Bitar has pled not guilty to the criminal charges he faces in the same indictment and is the only one of 11 individuals charged in the Black Friday case who has entered a not guilty plea. Burtnick joins Ira Rubin, Chad Elie, John Campos, Ryan Lang, Brent Beckley and Bradley Franzen in admitting guilt.

Absolute Poker’s Scott Tom, and Paul Tate and Isai Scheinberg of PokerStars, have yet to face up to the Black Friday allegations and are the only individuals among the 11 charged who remain at large. Scheinberg’s fate may receive favorable consideration by the court based upon the bailout of Full Tilt by PokerStars if and when the PokerStars executive appears in front of a judge to answer the charges.

Separate from the criminal charges are civil charges that have been filed against Bitar, Rafe Furst, Howard Lederer and Chris Ferguson that have been amended recently by the DoJ in an effort to seize the individual assets of the former Full Tilt board members. The government has listed assets totalling over $100 million that may be subject to forfeiture.

After remaining mum for over 17 months about the Black Friday charges, Lederer ended his silence recently and agreed to be interviewed in an attempt to tell his version of the events surrounding the mismanagement and demise of Full Tilt. The interview is widely available online in roughly half-hour segments and has been dubbed “The Lederer Files.” Bitar ended his silence shortly prior to and after his surrender to authorities in July. Furst published an open letter online to the poker world several months after Black Friday, while Ferguson has chosen to not yet come clean regarding his role in Full Tilt’s downfall.