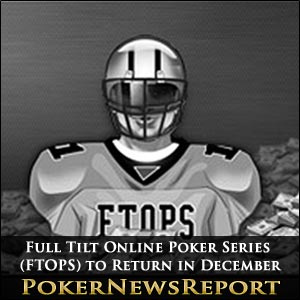 With just 28 days to go until the re-launch of Full Tilt Poker, the news has been released that the popular FTOPS poker tournament series will be one of the early attractions to greet players returning to the site on November 6th. Writing on the popular 2+2 forum, Shyam Markus was answering a series of questions; one of which was When is the next FTOPS? Shyam´s answer was December 2nd – 16th (Really!).

The Full Tilt Online Poker Series was a quarterly tournament series that ran up until the FTP shutdown in June 2011 and, prior to Black Friday, had a $640.00 + $40.00 Main Event which offered more than $1 million to the winner.

Although FTOPS XX was a more subdued affair after the closure of Full Tilt Poker in the States, the winner – Brazilian Ariel “ArielBahia” Celestino (who also won a SCOOP this year) – still picked up almost $350,000 after a four-way deal at the final table.

No further details were revealed about the new tournament series but, in the past, the FTOPS consisted of up to 45 major tournaments which could be bought into directly or qualified for in a variety of satellites – similar to the WCOOP or SCOOP on PokerStars.

Emails Going Out to All FTP Players

Shyam also announced on the 2+2 forum that emails to all non-US real money players on the previous Full Tilt Poker site will be sent out over the next few days. Slightly different to those which were sent out last month to players with cash balances over €3,000, the new emails are more of a this is what has happened so far email (Email text below). Because of the number of emails this is likely to involve, former poker players on Full Tilt Poker should get anxious if they have not received theirs by the weekend.

The Rational Group, which owns and operates PokerStars, acquired assets of Full Tilt Poker in August 2012 and appointed new senior management to re-open and operate the site as a separate brand to PokerStars, providing the online poker community with another high-quality poker platform.

Following re-launch, you will have complete access to your account – including your full balance – and you can once again play on the innovative online poker platform that made Full Tilt Poker home to serious online poker players.

This means you’ll soon be able to return to the Full Tilt Poker games and tournaments that you’ve known and loved for years, secure in the knowledge that your experience is now backed by the same account security and game integrity that millions of PokerStars players have trusted for more than 10 years.

Full Tilt Poker now operates under a license in Isle of Man, which is among the most trusted and rigorous e-gaming regulatory jurisdictions in the world. The Isle of Man Gambling Supervision Commission maintains vigilant standards for e-gaming, particularly the safeguarding of player funds. Information on these standards can be found here.

In the meantime, we welcome your feedback and ideas to help make Full Tilt Poker your number one poker site – please click here to visit the feedback page.

The email does not mention the verification process which was included in the FTP emails of September but more details on the technical aspects of the re-launch of Full Tilt Poker and FTOPS XXI are expected before the end of October.