Keeping in step with other poker rooms that are catering to recreational players, Full Tilt has rolled out “New to the Game” tables exclusively for beginners. 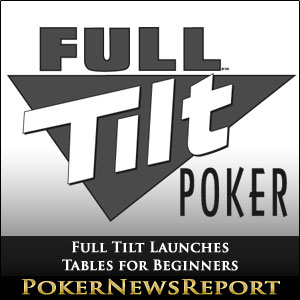 Keeping in step with other poker rooms that are catering to recreational players, Full Tilt has rolled out “New to the Game” tables exclusively for beginners.

Available at the micro-stakes levels in cash and tournament play in several variants such as No-Limit Hold’em, Pot-Limit Omaha and Fixed-Limit Hold’em, only beginners will be allowed to sit at the designated beginners tables. Once a player has been dealt 2,000 hands in ring games and played in 75 tournaments, he or she is considered a graduate and will no longer have access to the “New to the Game” tables.

The limits can be reached in each different variant. For instance, if you start at Fixed-Limit Hold’em and play the allowed 2,000 hands, you can then try a “New to the Game” Omaha table and be dealt another 2,000 hands along with fellow newbies at that variant before graduating and moving on.

It should be pointed out that even vastly experienced players will be allowed to start at zero and play until the 2,000 hand limit or 75 tournament games is reached. However, it’s relatively safe for beginners to assume that Phil Ivey won’t be sitting down at a $2.25 Sit’N’Go or $0.10/$0.20 No-Limit Hold’em table in order to take your money.

The beginners tables include other features designed to introduce rookies to the game. Each player’s hand strength is prominently displayed to only that player, enabling each to see where they stand in the progression of the hand. During play, “tool tips” are offered to help rookies know their options in various game situations. Also, the action will move a bit slower than a standard table, allowing players more time to think and decide the correct play to make. As for multi-tabling, only two “New to the Game” tables will be allowed at one time.

Full Tilt’s new feature coincides with an industry-wide push that aims to level the playing field for casual and recreational players. The most extreme example of this concept is Bodog and Bovada Poker, which made all tables anonymous and identifies players only by seat numbers. This serves to eliminate lesser-skilled players from being targeted by the more experienced “sharks’ who typically use poker-tracking software to get a better read on and take advantage of “fish.”

Other poker sites and networks have also tweaked their formats in order to find a better balance of skill levels. The iPoker Network recently rolled out anonymous tables and implemented a two-tier system last year designed to ring-fence player pools at certain stakes and for various games on its upper tier. That concept is in use to extend players’ lifetime expectancy at the tables. PartyPoker and the Revolution Gaming Network have also taken strides to segregate players according to skill levels.

The many changes currently undertaken in the online poker industry are going against the experienced pros who are seen as upsetting to the overall poker room ecology because they typically never deposit and only withdraw their winnings. Most in the industry agree that if nothing is done to balance skill levels and attract more net-depositing players, recreational players will eventually be driven away from the game.