Full Tilt recently launched its very first mobile app since the site was taken over by the Rational Group from the U.S. DoJ in the middle of last year. 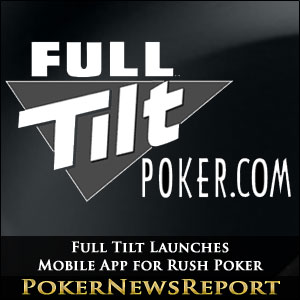 Full Tilt recently launched its very first mobile app since the site was taken over by the Rational Group from the U.S. DoJ in the middle of last year.

The app is available only on Apple iOS at this time for Rush Poker, Full Tilt’s innovative fast-fold offering that revolutionized online poker when first introduced in 2010. Currently, tournament play on the mobile app is not available. But players on the go are able to access ring games at stake levels of $0.02/0.05 to $2/4 in Fixed-Limit Hold’em, No-Limit Hold’em, Pot-Limit Omaha, and Omaha Hi/Lo.

The release of the Rush mobile app was announced by Full Tilt Poker Room Manager Shyam Marcus on a 2 + 2 posting. Marcus informed online poker forum readers that the app is HTML5-based and is only temporary. The sister site of PokerStars is currently developing native applications for iOS and Android. The launch of those versions won’t occur for several months, but will likely result in the HTML5 app being discarded.

Marcus added that the newly-released app is a beta version that will probably never evolve and was merely dusted off to give players a Rush poker option “while out and about.”

Under its initial ownership, Full Tilt was the first poker site operator to roll out a real-money mobile application with its Flash app for Android devices roughly three years ago. An iOS version followed six months later, just prior to the site being stripped of its operating license by the Alderney Gambling Control Commission. According to Marcus, Full Tilt attempted to resuscitate the old Android app, but the research and development team was unable to do so.

The Full Tilt beta release comes at a time when the world’s second-ranked poker site recently introduced its very first affiliate program since relaunching six months ago. All player traffic referred to Full Tilt by third-party marketers before August will receive a revenue share of 50%. Many affiliates were displeased when the new Full Tilt chose not to honor previous affiliate agreements that included several outstanding debts. The Rational Group insisted that they were under no obligation to do so.

Full Tilt is also on the lookout for a new CEO. The executive recruitment firm of Odgers Berndtson has been hired to lead the search. Full Tilt’s CEO under the old regime, Ray Bitar, avoided jail time for his role in the company’s downfall by agreeing to pay may more than $40 million in assets. Bitar is said to be in extremely poor physical health and reportedly requires a heart transplant of a most urgent nature in order to survive.