Fans of Full Tilt´s “Rush” fast-fold poker cash games are in for a treat this Christmas, with the chance to boost their bankrolls by up to $10,000. 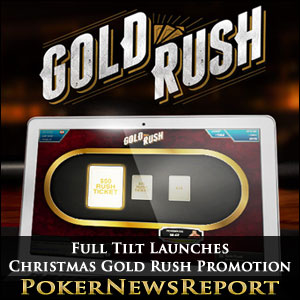 Fans of Full Tilt´s “Rush” fast-fold poker cash games are in for a treat this Christmas, with the chance to boost their bankrolls by up to $10,000.

Full Tilt´s “Gold Rush” promotion is sure to make it a Happy Christmas for players who enjoy playing fast-fold “Rush” poker. From tomorrow (December 19th), the site is introducing special “Gold Rush” tables into the Rush Poker lobby at which players can win Rush Poker ring game tickets, Full Tilt point bundles, and up to $10,000 in cash.

The promotion will also be giving away entries into an exclusive series of multi-entry Flipout Freerolls which will be played on Saturday December 27th and Saturday January 3rd and which have a combined prize value of $15,000.

How the Gold Rush Promotion Works

Rush Poker ring game tickets, Full Tilt point bundles, and cash prizes will automatically credited to your account, and if you win a ticket to a Flipout Freeroll you have the choice of which tournament you want to enter. There are four Flipout Freerolls in total and, because of the multi-entry format, players can enter each tournament up to ten times. The schedule for the events is:

Please note that you do not have to opt-in to the Gold Rush promotion to be eligible for the prizes, make a deposit to qualify, or play through a certain number of games before you can withdraw your cash prize. All you have to do is be an active player at the specially designated Gold Rush tables.

Tournament players who might feel left out in the cold with Full Tilt´s Gold Rush promotion should take a look at the “MiniFTOPS Satellite Hero” promotion that started earlier this week. The mini Full Tilt Online Poker Series gets underway on Sunday 4th January, and Full Tilt is offering players an incentive to qualify early for the miniFTOPS events through its comprehensive satellite program.