The relaunch of Full Tilt Poker is seemingly on schedule as the online poker site’s physical assets were flown to new Isle of Man offices. 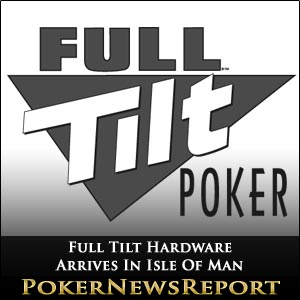 The relaunch of Full Tilt Poker is seemingly on schedule as the online poker site’s physical assets were flown to new Isle of Man offices.

Hosting racks, servers and various other hardware used in conjunction with operating Full Tilt were loaded on a Hercules military airplane in the Channel Islands and transported to the Isle of Man, the same self-governing island that houses PokerStars’ main offices. The Full Tilt servers had been maintained in the Channel Islands under regulation by the Alderney Gambling Control Commission in Alderney. Full Tilt will operate separately from PokerStars and will continue to be based in Dublin, Ireland, but the company will henceforth be licensed under Isle of Man regulations. Those regulations require that the servers and infrastructure must be located within the licensed region.

The computer equipment moved was said to weigh in the neighborhood of thirty tons and due to the height of some of the hardware, transport on a standard airplane was deemed to be unfeasible, according to Eric Hollreiser, head of corporate communications at PokerStars.

Now that the physical assets of the soon-to-be relaunched Full Tilt are in place, players are anxious to receive the monetary assets that have been tied up on the site since the middle of last year. With a relaunch date pegged for no later than Nov. 6, non-U.S. players should be reunited with their funds in about six weeks. Unfortunately, still no announcement has been made by the U.S. Department of Justice regarding when U.S. players can begin submitting claims for their funds.

Full Tilt’s Dublin offices currently have a staff of over 200 and the company is in the process of hiring more personnel in several areas, particularly in the realm of information technology. Hollreiser expects the company to grow and expand following the early November relaunch. Industry observers are anxious to see the number of players that play on the site and if Full Tilt can reclaim its status as the second-ranked online poker site in terms of player traffic behind PokerStars, as was the case prior to Black Friday. Much of the efforts of Full Tilt marketing executives will be geared toward rebuilding the name of Full Tilt as a reputable and reliable site where the funds of players are safe and secure. Time will tell if that goal can be accomplished.