Howard Lederer, Rafe Furst and Chris Ferguson each filed motions to dismiss the Black Friday charges against them. 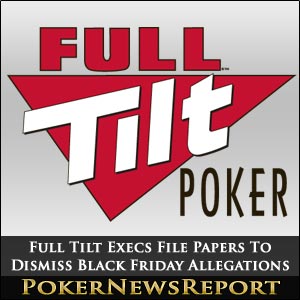 Howard Lederer, Rafe Furst and Chris Ferguson each filed motions to dismiss the Black Friday charges against them.

While Full Tilt CEO Ray Bitar was trying to gain his freedom on $2.5 million bond related to a superseding indictment unsealed last week, his colleagues on the board of directors were fighting the allegations in the original Black Friday indictment. The basic gist of the dismissal motions were that the three board members took no part in defrauding Full Tilt players in the global Ponzi scheme as alleged by prosecutors. Also, that Full Tilt’s operating procedures cannot be defined as an illegal gambling business as spelled out in the Illegal Gambling Business Act (IGBA).

The motions to dismiss attack the government’s claim that the Full Tilt board members knowingly defrauded players. For instance, Lederer’s filing states, The only specific factual allegations against Lederer are that he co-founded FTP and helped build it into a successful business, and that he received distributions as part-owner of the company. These allegations fail to state a fraud claim–or any claim–against Lederer.

Regarding the charge of running an illegal gambling business, Lederer’s attorneys countered that the Government has not proven that the alleged ‘gambling business’ conducted by Full Tilt Poker is illegal in the place where that business is conducted. This appears to be a jurisdictional matter that can be quite complex considering that Full Tilt was based offshore.

Motions to dismiss are routinely filed in civil proceedings, as defense attorneys choose to fight the factual substance of the charges faced by their clients. At issue seems to be whether or not Furst, Lederer and Ferguson told Full Tilt players that their money was safe and knew that, in fact, it was not. The allegations in the superseding indictment naming Bitar and co-defendant Nelson Burtnick, who handled the payment processing at Full Tilt, point out that Bitar willfully encouraged players to continue making deposits even after Black Friday, knowing that funds were not available to pay off all the players.