Big-name poker pros Chris ‘Jesus’ Ferguson and Howard ‘The Professor’ Lederer have been served with yet another class-action lawsuit by internet players angry with the Full Tilt Poker directors as they cannot remove funds from the collapsed website. 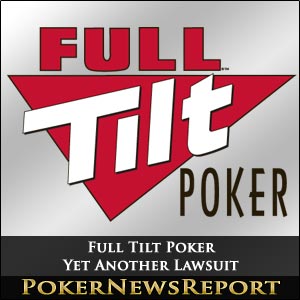 Big-name poker pros Chris ‘Jesus’ Ferguson and Howard ‘The Professor’ Lederer have been served with yet another class-action lawsuit by internet players angry with the Full Tilt Poker directors as they cannot remove funds from the collapsed website.

The lead class-action plaintiffs are New York’s Steve Segal, Minnesota’s Robin Hougdahl and Nick Hammer, and New Jersey’s Todd Terry, with lawyers for the quartet having filed suit in a Las Vegas federal court against Lederer and Ferguson when alleging conversion – which is any unauthorised act that deprives an owner of personal property without his or her consent.

The grievance – which was filed by solicitors with Vegas-based firm Shook & Stone – points out that, before and after April 15 of last year, or Black Friday, Ferguson and Lederer “exercised unlawful dominion and control” over Full Tilt players’ funds.

As such, the four plaintiffs are asking the court to order the defendants to return funds to players in the USA while also paying punitive damages of more than $150 million.

As you will all surely know by now, Black Friday witnessed a very dark day in [geolink href=”https://www.pokernewsreport.com/us-poker-sites”]online poker in the USA[/geolink] when the North American nation’s Department of Justice (DoJ) clamped down on numerous [geolink href=”https://www.pokernewsreport.com/online-poker-rooms”]poker rooms[/geolink], including Full Tilt, PokerStars and Absolute Poker, following allegations of bank fraud, money laundering and illegal gambling.

It got even worse for Full Tilt – which could well be relaunched soon if French investment firm Groupe Bernard Tapie (GBT) can complete a deal to purchase the poker room – later last year when the US government alleged that Full Tilt were “not a legitimate poker company, but a global Ponzi scheme (or fraudulent investment operation)”.

This latest lawsuit will focus on the Ponzi scheme claims, pointing out that American players have been unlawfully deprived of access to more than $150 million held in their Full Tilt Poker accounts – partly due to the activities of Ferguson and Lederer.

It is claimed that New Hampshire’s Lederer was given approximately $42 million via a “profit sharing” scheme, with some of the cash being loaned from Full Tilt Poker – and possibly still unsettled – while Ferguson, of Los Angeles, is believed to have been paid $85 million in a similar fashion. Again, it is unclear whether the five-time World Series of Poker (WSOP) bracelet winner was given the money through loans and if he has repaid that cash.

The lawsuit continues by stating that defendants also “approved distributions and loans to the other owners of Full Tilt Poker from funds directly traceable to the player accounts”, while emphasising that “the distributions and loans to Lederer, Ferguson and the other Full Tilt Poker owners were from intermingled funds containing monies from the player accounts”.

The lead plaintiffs – Segal, Hammer, Hougdahl and Terry – also filed a class-action lawsuit against Ferguson, Lederer, other Full Tilt Poker officials and New York-based corporate entities last year, alleging racketeering due to suspected money laundering, wire fraud and bank fraud, although that case was dismissed in January when a federal judge stated that the court did not have jurisdiction over individual Full Tilt Poker defendants.

With that in mind, the players’ lawyers have this time cited “diversity jurisdiction”, which establishes that all parties live in different states, while also emphasising that “personal jurisdiction” and “venue jurisdiction” come into play as two-time WSOP bracelet winner Lederer resides in Nevada and Ferguson has “conducted substantial business” inside the western state.

Additionally, lawyers pointed out that “many of the wrongs and acts complained of herein were contemplated and executed by defendants in this district”.

While Full Tilt’s defendants – Lederer and Ferguson included – have still to answer the claims, they have already denied similar accusations made in other lawsuits, including one filed in Los Angeles last October for different angry players.

Certainly, there appears to be no letting up in frustrated players’ rightful thirst for remuneration with three more federal civil suits waiting to be settled against Full Tilt Poker and their officials from different New York plaintiffs.

It should not be forgotten, however, that it is also claimed that Full Tilt owe approximately $440 million to customers across the globe while only holding about $60 million in their back accounts.

Keep up to date on everything related to Full Tilt, Black Friday and potential US legislation with Poker News Report.