Citing a judge’s ruling calling poker a game of skill, the Full Tilt defendants are requesting a sit-down with Judge Sand to determine the ruling’s effect. 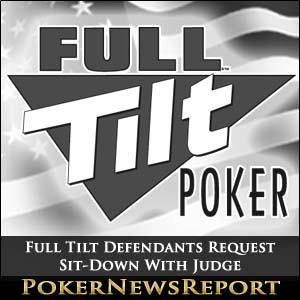 Citing a judge’s ruling calling poker a game of skill, the Full Tilt defendants are requesting a sit-down with Judge Sand to determine the ruling’s effect.

The lawyer for Howard Lederer has asked the judge in his client’s case to hold a status conference to evaluate the implications of the recent decision by a New York federal judge finding that poker is predominantly a game of skill and has implied that the ruling may mean that the allegations faced by Lederer “no longer have a legal basis.” Elliot R. Peters of the law firm of Keker & Van Nest believes that it would be in the best interest of justice that the parties involved discuss “how best to manage this litigation” regarding the finding by Judge Weinstein in U.S. v. DiCristina that poker is not gambling as spelled out in the Illegal Gambling Business Act (IGBA).

To no one’s surprise, the U.S. Attorney’s office felt there was no need for such a sit-down and responded to Peters’ request by sending a letter to Judge Sand as well, stating that “the Government respectfully disagrees with many of the conclusions reached in the DiCristina Order” and that any status conference to discuss the matter “would be premature and unworkable.” The missive to Judge Sand also set forth the belief that even if the decision by Judge Weinstein in the DiCristina case were to be upheld on appeal, the ruling is “not binding on this court” and there are still charges against Lederer and his co-defendants–Chris Ferguson and Rafe Furst, who joined Lederer in the status conference request–that are not reliant on IGBA statutes.