The U.S. Department of Justice (DoJ) amended the Black Friday complaint to include new forfeiture allegations against Ray Bitar and Howard Lederer. 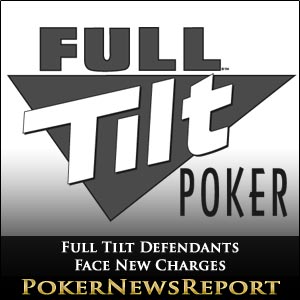 The U.S. Department of Justice (DoJ) amended the Black Friday complaint to include new forfeiture allegations against Ray Bitar and Howard Lederer.

The Second Amended Civil Complaint filed Sept. 10 by the DoJ states that proceeds obtained from illegal activites in violation of the federal Travel Act are subject to forfeiture and that there is probable cause to believe that the Defendant Properties constitute, or are traceable to, property used in illegal gambling businesses. The DoJ claims that $444 million was payed out to 23 Full Tilt owners allegedly while operating an unlawful gambling enterprise that defrauded customers.

Including the Travel Act in the charges gives prosecutors another statute on which to rely in addition to the Illegal Gambling Business Act (IGBA) and the Wire Act. The Travel Act forbids using interstate and foreign travel of transportation in aid of racketeering enterprises.

The amended complaint details Lederer’s expenditures starting from the latter part of 2006 until September of 2011 that shows $44,314,997.31 in alleged ill-gotten gains was deposited into bank accounts bearing his name. The expenditures included spending more than $10.5 million for a home and guest house around 2007. Additional records show that “The Professor” made mortgage payments, paid property taxes, funded retirement accounts, and purchased several extravagant vehicles such as a 1965 Shelby Cobra and 2008 Maserati GranTurismo with funds received from the criminal enterprise.

Expenditure lists were not made for Rafe Furst and Chris Ferguson, but Bitar’s purchases included two houses in Glendora, California. Due to the alleged “illegal enterprise” of Full Tilt in which the defendants obtained the funds, the DoJ is asking the court for forfeitures in the amounts of $42.5 million from Lederer, $42 million from Ferguson, $40.8 million from Ray Bitar, and $11.7 million from Furst.

Attorneys for the Full Tilt defendants have attempted to include a recent federal New York judge’s decision that poker is predominantly a game of skill and not gambling as defined by the IGBA into the Black Friday case. If successful, that would presumably dismiss some of the IGBA-related charges against the Full Tilt board members. However, Judge Sand has yet to rule on that issue and legal experts have opined that Judge Weinstein’s decision in the DiCristina “poker as skill” case would not be binding in the Black Friday lawsuit.