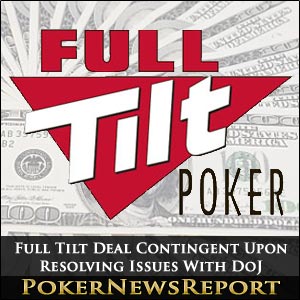 Negotiations between Group Bernard Tapie (GBT) and Full Tilt Poker continue to progress with one of the biggest hurdles in finalizing the purchase being the amount of money seized by the U.S. Department of Justice (DoJ) and any fines that may be imposed on the beleaguered poker site for its previous misdeeds.

“We’re still working with Full Tilt Poker,” said GBT lawyer Behnam Dayanim. “We have a signed agreement that allows us to do the things we need to do to ensure we’re comfortable. We’re working productively with that company, but any agreement ultimately depends on resolutions with the DoJ. We have to have that process work its way through to completion, but I’m optimistic right now.”

Poker players with unpaid account balances on Full Tilt are anxiously waiting to find out if, and when, they will be paid. Online poker forums are buzzing about the rumors of Tapie officials calling Full Tilt players with huge sums of money tied up and discussing various repayment options. These options include obtaining shares in the site, getting an immediate payout with a penalty attached, or receiving full payment over the course of a year.

Dayanim said that he’s aware that the poker industry is hoping that a deal can be reached quickly, but that negotiations of this magnitude take time to finalize.

“It’s a process,” the GBT said. “The process is still going on and hopefully we’ll have some good news to report. I remain optimistic that we’ll be able to reach an outcome that allows for the Tapie group to proceed with the proposed plan.” The proposed plan is believed to include paying Full Tilt players around the world. “It’s Tapie’s intention to arrange for repayment of players,” Dayanim added.

The fraud and money laundering charges levied against Full Tilt and U.S. Attorney Preet Bharara calling Full Tilt a “global Ponzi scheme” were mentioned a few times during Tuesday’s Congressional hearing on consumer safety in the gaming industry. The Full Tilt debacle has become somewhat of a rallying cry for regulation and legalization of online poker in the United States.

When asked during the subcommittee hearing about the DoJ’s Ponzi scheme allegations, Chairman Alfonse D’Amato of the Poker Players Alliance (PPA) said, “The one way to deal with Full Tilt Poker and others who have taken advantage of the system is to provide a tough, strong, enforceable licensing bill. There should be a requirement where [player deposits] are segregated and placed in a separate account. Had we had legislation, we could have prevented players from being taken advantage of.”