The agreement to acquire the assets of Full Tilt is honored as PokerStars makes a first payment of $225 million to the U.S. Department of Justice (DoJ). 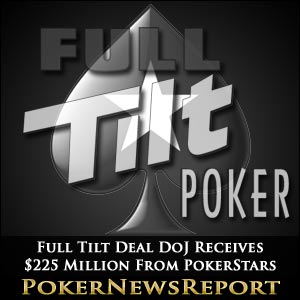 The agreement to acquire the assets of Full Tilt is honored as PokerStars makes a first payment of $225 million to the U.S. Department of Justice (DoJ).

A total of $731 will be paid out by the world’s leading online poker site in several installments that is scheduled to be finalized in three years. The next payment will be the long-awaited distribution to non-U.S. players that will take place in roughly 90 days upon the re-launching of Full Tilt Poker–now said to be no later than November 6. The sum of $184 million is earmarked for the rest-of-world players. The final three payments will again go to the DoJ in yearly installments in the amounts of $125 million, $100 million, and $97 million.

We’re delighted to announce that we have officially closed our deal with the U.S. DoJ as of today, August 9th, said PokerStars representative Lee Jones, after the initial payment was made.

U.S. players are still waiting for word on an announcement of a payment plan for them. Unfortunately, none has been forthcoming from the DoJ. All that has been assured up to this point is that players will be required to submit claims through the DoJ’s Asset Forfeiture and Money Laundering Section. Posters on online poker forums have been wondering whether full reimbursement can be expected, as a recent Forbes article alluded to the fact that the DoJ may pay only the amounts deposited by players–and not any winnings. Although Full Tilt and PokerStars admitted no guilt or wrongdoing in completing the deal with the DoJ, the U.S. government still views online poker as being illegal and may be uncomfortable in paying winning poker players.

The Poker Players Alliance is going to bat for U.S. players in the matter as Executive Director John Pappas said that PokerStars was allowed to fully pay its players last year following Black Friday and that Full Tilt was given authorization to do so but didn’t have the cash due to the alleged global Ponzi scheme and mismanagement of funds perpetrated by Ray Bitar and the other board members. Also, non-U.S. players will be receiving their entire account balances–winnings and all–upon the early November relaunch. The DoJ would be extremely inconsistent if they failed to reimburse U.S. players in full.

It would be unfair for players who were successful online to be shortchanged from what they have rightly won, and quite honestly, lawfully won, Pappas said.