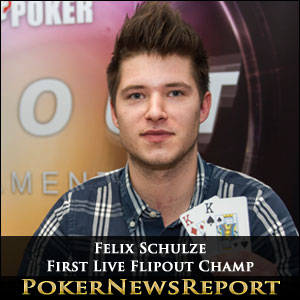 The German flipped his way to the final table and proceeded to capture the title in Vienna, Austria over 184 total entries who were vying for the first place prize of a €5,300 seat to the PokerStars European Poker Tour Vienna Main Event. The Hofburg Palace was loaded with big name poker stars who took part in the live Flipout freeroll, the first of its kind after FTP recently unveiled the new poker format.

Flipout tournaments follow a structure in which players automatically go all-in during the tourney’s first round. The winners from each table proceed to the next round with a guaranteed payout and a load of chips to continue the event under a standard betting format.

This speeds up action considerably, cutting out hours of pre-bubble play and getting players into the money fast, said a FTP press release. It also allows those who fail to finish in-the-money to move on to another tournament quickly without spending a substantial amount of time invested in the tournament only to fall short.

After going all-in on the first hand and flipping their way to the final table at the first live Flipout freeroll, nine lucky players then battled it out for that EPT Main Event seat. Hakan Can, Benjamin Mertens, David Vamplew and Thomas Putzenlechner finished sixth through ninth, respectively, each winning a tournament entry worth €120.

Richard Kapun was the next to go in fifth place, followed by Vlad Lache in fourth. Both received a €220 ticket for their efforts. Just missing out on heads-up play was Holger Hubner, who scored a tourney entry worth €330. Runner-up Andras Nemeth nabbed a €550 ticket for second place, while a chair at Day 1B of the EPT Vienna Main Event went to champion Felix Schulze.