U.S. Full Tilt players who were previously identified as affiliates were sent notices by Garden City Group allowing them to submit claims by March 2. 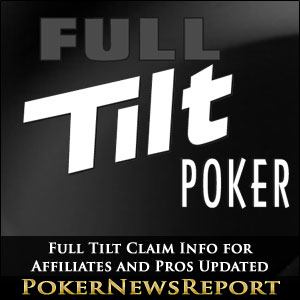 U.S. Full Tilt players who were previously identified as affiliates were sent notices by Garden City Group allowing them to submit claims by March 2.

Roughly 8,400 such notices were sent by GCG to those players, according to an update posted on the official website dedicated to the Full Tilt remission process. However, complaints made by players regarding their affiliate status and the amounts that GCG is prepared to disburse has begun at online poker forums.

Early indications are that many of those labeled as affiliates will not be receiving the full account balances that they may have accrued at Full Tilt. Posts at 2 + 2 are rife with comments from disgruntled players who question whatever formulas were used to determine that players were affiliates.

As GCG announced about one week ago, some 30,000 claims totaling $82 million will be arriving in the pockets of players with undisputed account balances later this month. That is sure to put a smile on the faces of those U.S. players who have waited nearly three years for reimbursement. However, if those players happen to owe money to the government for whatever reason, their payments will be reduced to satisfy the delinquent debt.

That piece of information was also announced on the FullTiltPokerClaims.com website, along with the notice to affiliates. A Unified Financial Management System Vendor Request Form attached to the email sent to players who owe Uncle Sam some money must be filled out and returned to GCG in 30 days. The Treasury Offset Program can be reached at (800)-304-3107 for players who would like further information regarding their debt.

Pro players flagged as such by FTP also received an update. A review is currently underway by GCG to determine eligibility of receiving funds and notices to those players will be sent once that review has been completed. Pros deemed eligible will be given 30 days in which to submit a Petition for Remission after receiving said notice.

Though affiliates may not be pleased with the latest update and the notices received from GCG, it is not shocking that players deemed as such will not be receiving their complete account balances. Many realized that discrepancies would occur when it was announced months ago that affiliates and pros would have their claims scrutinized to a greater degree than players who had no such ties to Full Tilt.

The 8,400 players under affiliate status are advised to follow the instructions outlined in the notices received regarding their petitions. While it may bring a sense of relief to vent some frustration over at 2 + 2, it likely will not help to express the same feelings to the GCG who have already detailed the instructions to take in the notices.