Full Tilt has announced that the pairing process for players in certain markets where the site will not be operating has begun and cashouts have commenced. 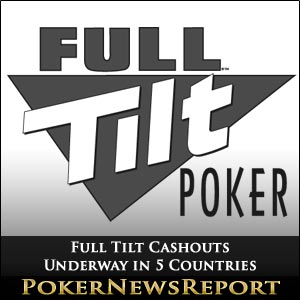 Full Tilt has announced that the pairing process for players in certain markets where the site will not be operating has begun and cashouts have commenced.

Although most rest-of-world (ROW) players are still scheduled to be reunited with their Full Tilt funds upon the relaunch date of Nov. 6, players in five countries can now pair up their FTP accounts with a PokerStars account in those regions and cashout. Players in France, Belgium, Spain, Estonia and Denmark can now log on to Full Tilt and follow the instructions for the pairing process. Those instructions include opening or using their existing PokerStars account on the platform in their particular region such as PokerStars.fr or PokerStars.es.

Once logged in simultaneously on both online poker sites, a choice in PokerStars found under each individual player’s account menu allows a 14-digit number to be copied and then also entered similarly on Full Tilt. Funds will immediately be transferred to the PokerStars account and can be used for play or withdrawal. The pairing process for ROW players — excluding the five aforementioned countries — has not yet been activated. It is scheduled to be activated by Nov. 6.

Two additional countries will not be serviced by the new Full Tilt — Italy and the United States. PokerStars is still ironing out details with Italian regulatory officials on a reimbursement plan and hopes to have one in place shortly. And U.S. players must wait for the DoJ to announce a format for the repayment of roughly $150 million due to Americans.

Full Tilt Poker Room Manager Shyam Markus has also announced that play money tables are up and running at Full Tilt. Players everywhere –excluding the U.S. — can download the Full Tilt Poker software, log in, view their account balances and player points, and enjoy action on play-money tables. Signing in is the same as prior to the Full Tilt shutdown, but players can expect to be asked to accept the relaunched site’s terms and conditions and are recommended to change passwords. U.S. players must access the site at FullTiltPoker.net to partake in the play-money tables, but that play site won’t be operational until Nov. 6.