Players who filed a claim for FTP remission should receive payment by March 31, 2014. 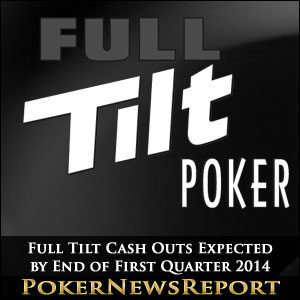 Players who filed a claim for FTP remission should receive payment by March 31, 2014.

Shortly after the November 16th deadline for filing a Full Tilt Poker remissions claim passed, the Garden City Group announced that it expects most, if not all, claims to be paid out by the first quarter next year. Pros, affiliates and players who disputed their claims are not included in the current time frame.

Although the filing claim deadline was originally last Saturday, on Friday the Garden City Group released a statement indicating that Pros and Affiliates will receive an extension. The exact date of the extension is currently unknown.

What is known is that Pros who were playing with funds from FTP or who were compensated by FTP to play on the FTP site are ineligible. GCP is committed to working with the Government to determine eligibility lists. Once a determination is made, eligible parties will have 30 days to file a Petition.

In other words, big name pros that acted as ambassadors for the site will not be receiving compensation.

Furthermore, Affiliates will only be repaid in the portion of their account balances that does not relate to their Affiliate status. Players who doubled as affiliates are also entitled to their player balance but not funds generated through affiliate payments.

In total Full Tilt Poker sent out 1.4 million emails. Yet, only 41,000 claims were filed – a stark contrast to the number that was originally expected. It is assumed that many of the players who didn’t file a claim had negligible balances on FTP.

Full Tilt was one of the biggest online poker sites shut down by the U.S Federal Government on Black Friday. Since then, its operators have been accused of running a Ponzi scheme, with former Full Tilt Pros Howard Lederer and Chris Ferguson at the forefront of the scandal. In total, FTP players were swindled out of nearly $160 million dollars.

U.S players proved to be the biggest victims, as their funds have been tied up for over 30 months. International players fared much better, receiving their money in mid-2012, shortly after PokerStars and its parent company The Rational Group acquired Full Tilt. PokerStars would ultimately pay $184 million in player balances as part of their deal with the Department of Justice.

It will take a total of nearly three years, but the good news is that players victimized by the FTP will finally receive their just due.