The verbal attacks made by Negreanu on his weekly rant video blogs directed toward Full Tilt Poker’s Ray Bitar, Chris Ferguson and Howard Lederer do nothing to solve the situation of Full Tilt players. 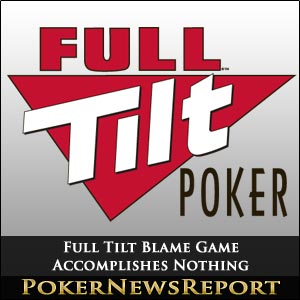 The continued verbal attacks made by Canadian poker pro Daniel Negreanu on his weekly rant video blogs directed toward Full Tilt Poker’s Ray Bitar, Chris Ferguson and especially Howard Lederer, which were subsequently defended by Doyle Brunson, do nothing to solve the situation of Full Tilt players ever receiving their frozen account balances from the shuttered poker site.

As one of the world’s top poker players, and possibly its most outspoken, Negreanu has been using weekly video messages to espouse his views on various topics, including Jason Somerville recently coming out about his homosexuality, Negreanu’s diet as a vegan while travelling, his poker playing, and the Full Tilt debacle.

Negreanu certainly has the right to express his opinions on any matter he so chooses. Because of his stature in the game, many people listen to what he has to say. But his name-calling and verbal assaults of Howard Lederer in his video rants accomplishes nothing but to further rile Full Tilt players who are still angry and hoping to someday be paid.

In his February weekly rants, Negreanu ridiculed Howard Lederer and Chris Ferguson for remaing silent since Black Friday and never offering an explanation as to how Full Tilt Poker,  the once-proud poker room, could “fleece” its players and continue to take deposits following Black Friday knowing that the company’s solvency was an issue. Negreanu didn’t include Rafe Furst in any of his tirades, admitting that Furst made a public statement on his own behalf in September. However, when Furst did speak out following the allegations, he was vilified and blasted in every possible manner on public poker forums. Furst did receive some words of encouragement and support from some players, but the majority of comments posted in response to his open letter were critical and full of hatred, anger and blame. No matter what he would have said to defend himself at the time short of promising to personally pay back every player with an account balance on the site was destined to be met with anger and contempt. And although several months have passed since then, and the anger of players may have subsided ever so slightly over the passage of time, if Lederer and Ferguson were to try and explain their side of the story at this time, they would undoubtedly be met with the same anger and hatred directed toward Furst. And probably even worse. In other words, they are damned no matter what they do–speak up or remain silent.

Granted, many players who have money stuck on Full Tilt have every right to be angry at not being reimbursed. Who wouldn’t be irate over losing hard-earned money? But at this point, the continued verbal assaults by Negreanu and the suggestion that a baseball bat to the groin of Lederer is called for and acceptable behavior is nothing short of reprehensible.

Negreanu’s vitiolic attacks, although they may be applauded by players who anxiously await word on Full Tilt sale negotiations to hear if the deal will ever go through and players will finally be paid, continues to bring harm to the poker industry and, to some extent, to the negotiation process. We know that Full Tilt was run poorly and certainly negligibly by accepting phantom deposits from players without having payment processors in line to fully cover the financial transactions. Do we need one of the game’s top players to attack the board of directors and further incense an already angry player base? How can that possibly help the situation? To further complicate matters, Negreanu’s latest rant ridicules Bernard Tapie–the possible new owner of Full Tilt–as having a shady past and not being the type of owner that would be good for a poker site. Is this the proper way for Full Tilt players to get paid? By questioning the integrity of a potential buyer of the site who, if the deal does go through, reportedly will pay back all Full Tilt players with involvement from the Department of Justice? How do these verbal assaults help Full Tilt players?

Doyle Brunson, the classiest of all players, appears to be the voice of reason in this latest development in the saga of Full Tilt Poker. Writing in his blog that he firmly believes that Lederer and Ferguson are not completely innocent, but that “the degree of the guilt is misunderstood and that there was no intent to defraud anyone,” Brunson succintly puts into words what many players (the ones who don’t spew hatred on public poker forums or video blogs) feel is most likely the truth of the situation. Perhaps the mess was created more by mismanagement than fraud or theft. Apparently, the truth will be determined in a court of law.

For expressing his views on the matter and defending Ferguson and Lederer, Brunson was subjected to a barrage of name-calling and threats of violence from “a bunch of retards waiting to blast anything or anybody,” as Brunson referred to some of the online poker forum posters. As long as there are public forums on the internet in which players can express their views, it stands to reason that many will choose to release their hatred and contempt toward others. Nothing much can be done but to avoid or ignore the comments from the hatemongers.

Negreanu has the right to speak his mind about any and all topics, as he undoubtedly will continue to do. But when a pro player of his stature and standing advocates violence and ridicules Lederer and Tapie, seemingly on behalf of Full Tilt players and the poker-playing community, nothing positive is accomplished from such rants. The verbal attacks become part of the problem rather than part of the solution.

You can watch the video over here. Leave a comment on our site to share your opinion.