An attorney representing Full Tilt Poker has said that some players with large sums of money in their players’ accounts at Full Tilt may be hesitant to file claims for their money from the Department of Justice (DoJ) for fear of government action in relation to the funds. 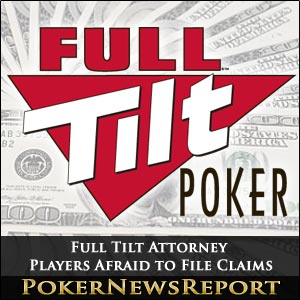 An attorney representing Full Tilt Poker has said that some players with large sums of money in their players’ accounts at Full Tilt may be hesitant to file claims for their money from the Department of Justice (DoJ) for fear of government action in relation to the funds.

Jeff Ifrah, a Washington DC-based lawyer who has represented CEO Ray Bitar and Full Tilt in numerous capacities recently, has urged U.S. authorities to facilitate and assist American players who will be reclaiming money that is currently frozen on Full Tilt.

“Players need some encouragement to submit their claims as some may be concerned about action from the IRS,” Ifrah told eGaming Review. “Unfortunately, there’s not an expert who can say to players ‘send me your claims and I will gather them all up.’”

In an agreement that was brokered last week between the DoJ and Groupe Bernard Tapie (GBT), it was revealed that Full Tilt Poker will forfeit its assets to the DoJ, who will then sell Full Tilt’s assets to GBT for $80 million. The deal, which apparently still requires approval by Full Tilt shareholders, also calls for GBT to reimburse non-U.S. players, while the DoJ will be responsible for paying U.S. poker players. Exact details have not been solidified, but U.S. players will be required to file claims for compensation directly to the U.S. DoJ.

“The government will establish a fund to payback the U.S. players,” Ifrah said. “Obviously, there is going to remain a lot of questions [as to] how players are going to submit a request.”

Poker tax expert Ann-Margaret Johnston weighed in earlier this month on the possibility of Full Tilt poker players having to apply for reimbursement from the government for funds that the DoJ considers to be ill-gotten and in violation of the law.

“I think it’s awfully weird,” Johnston said. “I don’t like my check coming from the DoJ. They’ve made a stance that it’s illegal. The irony is the fact that they’re paying you out on something they’ve said is illegal.”

Another issue that is thought to be getting in the way of Full Tilt sale negotiations being finalized and player reimbursement to commence is the recent motions filed by Full Tilt board member and poker pro Chris Ferguson that lays claim to over $98 million seized by the government on behalf of Kolyma and Vantage, two companies run by Full Tilt. In the legal brief, Ferguson said the accounts “contain funds deposited by Full Tilt Poker players to be transferred to Vantage and/or Kolyma or funds deposited by Vantage and/or Kolyma that were in the process of being returned to Full Tilt Poker players.”

It is believed that the Full Tilt board will withdraw that claim for $98 million in seized funds, but it has, as of yet, not been withdrawn. However, Barry Boss, one of the named lawyers representing Full Tilt, is optimistic that it will happen. “It is ultimately contemplated that the claim will be withdrawn but there are some additional events which need to occur first, primarily a deal between FTP and GBT,” Boss said.

In any event, the DoJ reimbursing U.S. players will undoubtedly lead to a plethora of tax implications for players receiving funds. Without intending to strike fear in anybody, perhaps a last bit of advice from a poker tax expert should be heeded.

“You should always pay taxes on it [poker winnings] no matter what,” Johnston said. “The IRS could know about it if they want to know about it. It is not uncommon for the IRS and DoJ to share information.”