Former U.S. Full Tilt players labeled as affiliates in the remission process received word that rakeback payments made to their accounts will be recoverable. 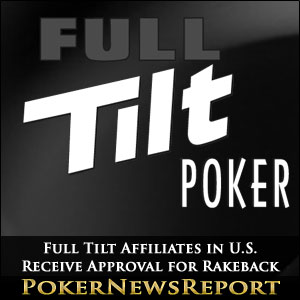 Former U.S. Full Tilt players labeled as affiliates in the remission process received word that rakeback payments made to their accounts will be recoverable.

The Garden City Group (GCG) made the announcement via the official website dedicated to the remission process. The latest update comes just four days after a previous posting advised that 8,400 affiliates received emails detailing their recoverable account balances and gave a response date by players of March 2, 2014.

That earlier announcement of January 31 was met with a backlash from a number of angry affiliates who questioned the formula used by the DoJ for determining funds that may have been tied to affiliate endeavors. Quite a few posted their displeasure at online poker forum 2 + 2, indicating that the DoJ was mistakingly including rakeback as funds that would not be paid in the remission process.

The voice of affiliate players has apparently been heard. Early on in the remission process, the GCG stated that online poker forums were monitored by claims administrators and it is quite likely that the DoJ reevaluated its stance toward rakeback payments for affiliates after disgruntled players expressed their concerns.

Should any rakeback continue to be not allowed by the DoJ, the GCG has informed affiliates that it is the responsibility of the player to dispute the account balance and provide an explanation differentiating rakeback from Affiliate revenue. Indications are that affiliate players would be more than happy to do so, as the amount in question may be substantial for a number of grinders who also happened to earn some cash by referring other players to Full Tilt.

The latest posting at FullTiltPokerClaims.com dated February 4, 2014 that allows affiliates to recover rakeback follows a long line of updates made by GCG since the remission process began in mid-September last year. The process continues to be modified as each new phase comes into view.

Players should be reminded that the decisions made, although seemingly coming from the GCG, are actually being handed down by the DoJ. The GCG is merely handling the claims process at the behest of the DoJ. It is not the GCG that calls the shots regarding recoverable funds pertaining to players, affiliate and pros.

As it stands now, roughly 30,000 players with undisputed claims will be receiving about $82 million by the end of February. More information regarding payments to affiliates will be forthcoming after the GCG scrutinizes the Petitions for Remission submitted by the due date of March 2. Still to come is information for players identified as pros.