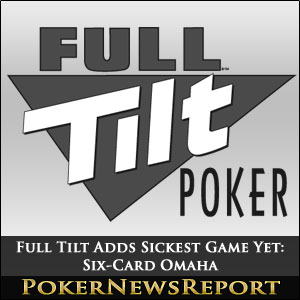 Six-card Omaha: it’s the kind of game you might play with your buddies at a friendly home game. But Full Tilt Poker, already known for its outlandish variants on traditional poker games, is incorporating it into its regular lineup. From here on out, Six-Card Omaha will be featured in tournaments, SNGs and cash games.

Here’s how it works. Each player is dealt six hole cards. From thereon out, the game is played just like Pot Limit Omaha. Players still use two cards from their hand and three on the board to make their best possible five card hand. The only real difference is that instead of using two out of four cards, players can choose two out of six. Although it may initially seem like a minor difference, the 5th and 6th cards will dramatically change the way the game is played.

Think about the ramifications. Players can potentially be dealt five to a straight, triple suited cards or three pairs in their hand. The odds of making a strong made hand are a virtual guarantee, rendering most non-nut draws essentially useless. Big full houses, quads, and straight flushes will become standard winning hand. Yes, Six-Card Omaha is truly a degenerates dream.

Full Tilt’s announcement comes on the heels of their biggest competitor PokerStars introducing Five-Card Omaha and its variants in late-March. Six-Card Omaha will only be available in Heads-Up or 6-Max tables, as there are simply not enough cards for it to be played full ring.

To promote the new game, Full Tilt will feature it as the “game of the week” next week, meaning that players will receive double points for playing. To further encourage action, 6-Card Omaha will be the game of choice for event #69 of the MTOPS. For only a $3 entry fee, players can compete for a piece of the $7,500 guaranteed prize pool. Given the amount of pure degenerates who play online poker, no one would be surprised if the guaranteed amount is surpassed by a significant margin.

For those considering playing the game for a living, just make sure your bankroll can withstand the swings, as Six-Card-Omaha stands to feature extremely high variance.