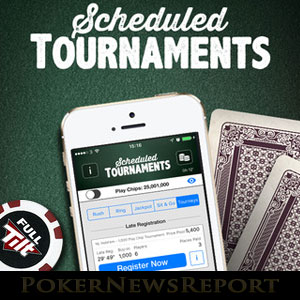 [geolink href=”https://www.pokernewsreport.com/full-tilt-poker”]Full Tilt[/geolink] has long been recognised as having the best poker software for Windows and Mac desktop computers; and, in December last year, the site´s mobile poker app was recognised as being the best in the industry when it was awarded a nice little glass trophy for “Best Poker App” at the IGA Gaming App Awards.

Considering that the Full Tilt mobile poker app only came out of beta testing in February 2014 – initially only offering its fast-fold Rush Poker game – and that cash games, Sit & Go games and Jackpot Poker were not added until July 2014, the achievement was pretty remarkable. But now Full Tilt is taking its mobile product into a new dimension with the addition of scheduled tournaments.

Long Commutes May never be the Same Again

According to the Full Tilt web site, a “variety of tournaments” are now available through the update app, including Knockout Bounty Tournaments, Shootout Tournaments and Flipout Tournaments – in which each player is all-in for the first hand, and the survivors from the first hand continue to play a freezeout tournament with the knowledge that they are already in the money.

Where to Find the Full Tilt Mobile Poker Apps

Existing Full Tilt players already playing cash games and Sit & Go games on their mobile devices should not have to do anything to access the poker tournaments. The next time you open up the apps, they will update automatically and add poker tournaments to the current range of poker and casino games.

Players who currently only play at Full Tilt on a desktop computer can download the mobile poker apps from the App Store for Apple devices (iPhone, iPad and iPod Touch); or, if you want to play poker on an Android device, visit the Full Tilt web site from your mobile device and download the Full Tilt poker app for Android directly from the site.

Full Tilt Looking to Steam Ahead to Attract New Business

The addition of scheduled tournaments to it mobile poker apps is not the only action Full Tilt is taking to attract new users to its site. The site recently applied to join the Steam entertainment platform – a one-stop shop for the e-gaming community. Steam has millions of subscribers, and although only the play money version of the software would be accessible by e-gamers on the Steam platform, paid-for add-ons would also be available (such as extra bundles of play chips).

History shows that the majority of today´s real money player database first started playing online poker with play chips, so this is a sensible move by Full Tilt to increase the exposure of its poker product to a new market. Doug “WCGRider” Polk, Bertrand “ElkY” Grospellier and Randy “nanonoko” Lew were all big-time computer gaming enthusiasts before stepping into the world of real money poker, so only time will tell if the next generation of online poker players at Full Tilt evolve from online gaming.