Day 6 of the Full Tilt Online Poker Series offers a fantastic run-up into the weekend´s events with two feature tournaments which are sure to be keenly contested. 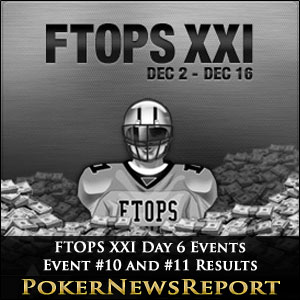 Day 6 of the Full Tilt Online Poker Series offers a fantastic run-up into the weekend´s events with two feature tournaments which are sure to be keenly contested.

It is yet another intriguing day´s poker in the FTOPS XXI with [geolink href=”https://www.pokernewsreport.com/full-tilt-poker”]Full Tilt[/geolink] hosting two events which are interestingly positioned within the feature tournament schedule. Again, both tournaments have significant guaranteed prize pools but – as we have seen throughout the week during FTOPS XXI – those guarantees are likely to be well met, such as been the popularity of the series to date.

There is a two hour late registration period – up until the end of level 10 (blinds 100/200) – and the early start time for this tournament will probably be justified with the number of entries that are anticipated. This is a game that could go on all night!

FTOPS #13 is a $322.00 buy-in 2-7 Triple Draw tournament with 4,000 starting chips but blinds starting at 50/100 for this 6-Max event. The tournament carries one of the lowest guarantees of the Full Tilt Online Poker Series, but one which already looks likely to be surpassed due to the interest that has already been evident in the satellite qualifiers leading up to this events and the list of pre-registrations.

The cards for this tournament will be in the air at 14.00 server time (7.00pm GMT) and there is a two hour late registration for FTOPS #13 as well – although with blinds at 340/680 by Level 10, you may want to consider the wisdom of parting with $322.00 ten Levels into the event when there are some tasty treats scheduled for the weekend.

The last minute satellites have been a bit stingy with their guarantees recently, but today the better opportunities to line-up in a FTOPS tournament are back.

At 8.00am server time (1.00pm GMT) there is a $55.00 buy-in Turbo 6-Max freeze-out which offers ten guaranteed seats into FTOPS #12.  Late registration is available for those who like to mull over their croissants and coffee until the end of Level 6 (30 minutes), but be aware that – unlike the feature tournament – you only get 1,500 starting chips.

The $55.00 satellite to the 2-7 Triple Draw FTOPS #13 at 11.30am server time (4.30pm GMT) is also a turbo tournament which, although guaranteeing three seats to the target tournament, is sure to be a popular stepping stone for players wishing to participate in this unique event. Those who want to late register have 30 minutes in which to do so, but the blinds start quite high again and you only get 1,500 chips to start with.

Players climbing up the ladder in the FTP SnG Steps program may also wish to use a Step 5 ticket to enter directly into FTOPS #12.

It was a day full of strange occurrences on Full Tilt Poker yesterday. A FTOPS event was undersubscribed, Chris Moorman came second in a heads-up and Jeremiah Vinsant lost the lead in the FTOPS XXI Leaderboard competition.

Only one event so far this week has failed to attract enough players to make its guarantee – and that was only by $1,000 – and if there was to be a second, you might not have expected it to be the 6-Max Rush Poker SuperStack multi-entry Event #10, considering the popularity of the Rush Poker format and the fact that Monday´s Rush Poker tournament more than doubled its guarantee.

Nonetheless, only 273 players entered the $216.00 buy-in tournament (90 of them twice), and within four and a half hours, Dutch online poker player “bullyingpros” had  collected the $17,850 first prize ahead of Australia´s “TheFatFISH”. It was also a good game for Russian “serguginyo”, who qualified for the event via the last minute satellite which concluded less than two hours before FTOPS #10 started and left the tables in twenty-fifth place for $487.50.

FTOPS #11 was the only Shootout event scheduled in the Full Tilt Online Poker Series for season XXI and it attracted several big names eager to prove that they were the biggest guns in town. Mohsin Charania, Luke Schwartz and Tom Middleton were all shot down in flames in the first of the three rounds, while Adam Junglen and Sean Getzwiller departed on the Deadwood Stage during round two.

The climax of the tournament was fought out between Sebastian “p00cket00” Sikorski, Chris Moorman and the appropriately named “patgarrett01” (the sheriff of Lincoln County who killed “Billy the Kid”). Sikorski beat Moorman in the heads up to capture the $27,412 first prize, gold FTOPS jacket and gold avatar awarded to all winners of FTOPS events.

Jeremiah “Believer8219” Vinsant is no longer on top of the FTOPS XXI after taking a day off from competing in the series. He has been replaced by “mrcall912” after the Russian´s fourth place finish in FTOPS #10 and also overtaken by previous FTOPS winners “fowirls” and “Garbally”, who both cashed in the Shoot-Out.