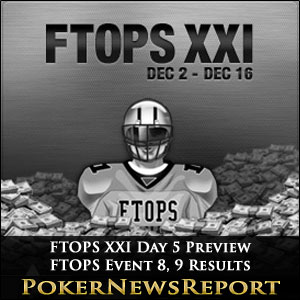 As yesterday´s action proved [geolink href=”https://www.pokernewsreport.com/full-tilt-poker”]at Full Tilt Poker[/geolink], having just two FTOPS feature tournaments scheduled in a day does not reduce the thrills and spills of the series or give players time off for a breather, and today´s events will stretch the poker skills of each player who participates to the limit.

If you have never played in a multi-entry tournament before, the two entries are played individually until such time as insufficient tables remain to support multiple entries – at which point the two chip stacks are combined into one. Although it is unlikely that one player would have two separate stacks approaching the 6-Max final table, just think of the chip advantage they would get if they could combine two substantial stacks on the final table of this event!

The triple shoot out format means that the winner of the tournament will have to overcome three tables of top-quality players, and consequently the maximum number of entries for this event is limited to 729. Late registration is only allowed until the first player has been eliminated, so, if you wish to be involved in this event, you should get your registrations in early!

The last minute satellites today offer a good opportunity to qualify for the feature events at a lower cost than the full buy-ins. At 8.00am server time (1.00pm GMT) there is a $55.00 buy-in multi-entry Turbo 6-Max satellite into FTOPS #10 (please note this is not a Rush tournament) that has five seats guaranteed for the target tournament.

At 11.30am server time (4.30pm GMT) Full Tilt Poker is hosting a Turbo freezeout satellite with another five seats guaranteed into the Triple Shoot Out (FTOPS #11). Both last minute satellites have late entry through to the end of Level 6, which is just 30 minutes in Turbo tournaments.

Players climbing up the ladder in the FTP SnG Steps program may also use Step 5 tickets to enter directly (up to twice) into FTOPS #10.

There were only two feature tournaments scheduled in the Full Tilt Online Poker Series (FTOPS) on Wednesday, but both were well-supported and smashed the advertised prize pool guarantees.

The first of the day´s events was a SuperStack PL Omaha Rush tournament with a $216.00 buy-in and $50,000 guarantee. The participation of 487 players almost doubled the guaranteed prize pool and, after five and a half hours (so, not much Rushing at all!), Thomas “Garbally” Finneran from Ireland emerged victorious in the event after a final table deal which saw the winner´s prize spilt between Finneran and Sweden´s “arhimides”.

The “evening” game resulted in a landmark victory for a Romanian player. “ottoman09” won Romania´s first WCOOP bracelet earlier this year, and now he (or she) has won the country´s first FTOPS gold jacket. Victory in the $109.00 buy-in R/A 6-Max NL Hold´em tournament came after ten and a half hours, and after 804 players had entered the event and smashed one of the week´s biggest guarantees.

Victories for “ottoman09” and “Garbally” elevated them into third and fourth place respectively on the FTOPS XXI leaderboard competition courtesy of previous cashes they had in previous FTOPS XXI events. There was no movement at the top as – for the first time this week – a day went by without Jeremiah “Believer8219” Vinsant finishing in the money and nobody was able to take advantage.