After a frenetic start to the Full Tilt Online Poker Series (FTOPS), there is no slowing down, with three further featured tournaments to whet your appetite. 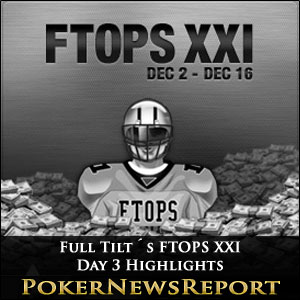 After a frenetic start to the Full Tilt Online Poker Series (FTOPS), there is no slowing down on Tuesday, with three further featured tournaments to whet your appetite

FTOPS #5, #6 and #7 are an absolute dream for those who like their poker with a little variety – and with acronyms! The three tournaments between them guarantee $275,000 in prize money but, if the first two days of the FTOPS XXI poker series is anything to go by, the prize money distributed by the time we all go to bed will be significantly more!

FTOPS #6 is a $216.00 buy-in Double Stack H.O.R.S.E. tournament which gets under starters orders at 14.00 server time (7.00pm GMT) and has a guaranteed prize pool of $75,000. Late-comers are welcome until the end of Level 8 (the second round of Razz) and it is odds-on that this is going to be one of the most popular tournaments of this week.

FTOPS #7 is a NLHE Super Turbo Multi-Entry Knockout with a $322.00 buy-in of which $50.00 is the bounty on each player´s head. Players only have 300 chips to start with and levels last five minutes – consequently late registration is only allowed up until the end of Level 3. The tournament starts at 17.00 server time (10.00pm GMT) so Don´t Be Late!

As with all the tournaments featured in FTOPS XXI, there are last minute satellites to today´s feature events, and they kick nice and early with a $55.00 PL HA satellite to FTOPS #5 at 8.00am server time (1.00pm GMT). 10 seats are guaranteed to the target tournament in this Turbo 6-Max event (1,500 starting chips – blinds increase every 5 minutes) with late registration allowed for 30 minutes.

Just a couple of hours later at 11.30am server time (4.30pm GMT), there is a turbo $55.00 buy-in H.O.R.S.E. qualifier for FTOPS #6 with 10 seats guaranteed. Again players get 1,500 starting chips, levels last five minutes and late registration is available until the second round of FL Hold´em (level 6).

The last of today´s last minute satellites – for FTOPS #7 – is a Super Turbo Multi Entry NL Hold´em Freezeout (no knockouts in this event). The $53.00 buy-in satellite takes place at 14.30pm server time (7.30pm GMT) and has 15 seats guaranteed for the target tournament. With 300 starting chips and levels of 5 minutes, late registration is available for only 15 minutes!

Unlike on most other days, when Step 5 SnG tickets can be redeemed for most tournament or satellite entries, they can only be used today for direct entry into the FTOPS #6 H.O.R.S.E. tournament.