Full Till Poker want to “Deal Me In”

Details have been released of Full Tilt Poker´s re-launch offers to existing real money poker players to prevent the swift withdrawal of $184 million. 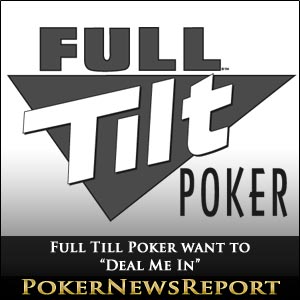 Details have been released of Full Tilt Poker´s re-launch offers to existing real money poker players to prevent the swift withdrawal of $184 million.

The date many online poker players have been waiting for is almost upon us. On Tuesday November 6th, Full Tilt Poker will go live once again and players will have access to more than $184 million frozen in their accounts since the Alderney Gaming Control Commission suspended the online poker web site´s licence in June 2011.

Full Tilt Poker´s new owners – conscious of the fact that times are much harder financially for many players than they were sixteen months ago and fearing a major cashout frenzy – have already announced the return of the Full Tilt Online Poker Series in December and have now added a “Deal Me In” promotion to keep players at the tables when the site re-launches.

“Deal Me In” Details

The Full Tilt Poker “Deal Me In” promotion will be available to all real money players when the site goes live in less than two weeks and according to the press release from Full Tilt Poker´s offices in Dublin consists of:-

The FTP press release also gave notice of a FTOPS XXI Satellite Frenzy, with hundreds of bonus entries to FTOPS XXI events – worth more than $300,000 in total – added to special satellite tournaments with players being able to qualify for “Full Tilt Poker’s premier tournament series” for a fraction of the cost of buying in directly.