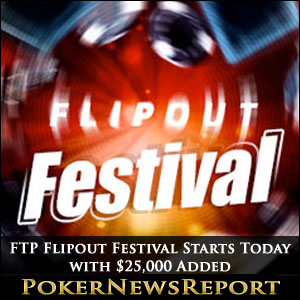 What happens in a flipout tournament is that players are all-in every hand until the money bubble is burst and all the surviving players are assured of cashing. Then the game changes into a “regular” multi-table tournament and is played out until a winner is determined. The new format has already attracted hundreds of players to the site and even PokerStars Pro Daniel Negreanu has had a go – commenting on Twitter Big fan of this new tourney concept from FTP called flipout.

How a Typical Flipout Tournament Works

Over the past two days, the most popular format of Flipout tournament has been the 36-player Sit n Gos. Once thirty-six players have registered they are seated at four 9-handed tables. Every player is all-in on the first hand, and the winner from each table then carries forward 3,500 chips to do battle on a four handed final table at which the blinds start at 100/200 (ante 20 chips) and levels increase every ten minutes.

Flipout tournaments can be found in both the “Sit & Go” and “Tournament” lobbies on Full Tilt Poker.

In the Flipout Festival the structure of the events will be slightly different. Unlike the Flipout games played as “Sit n Go” events, 108 Flipout tournaments will start at scheduled times irrespective of the number of players registered (obviously there is no late registration!).

Players will be distributed among tables depending on how many have registered, and play the first round as a flip to determine who progresses onto the second round. Every player who survives the flip will be assured of a cash – with the prize pool not only being comprise of the buy-ins, but having added value due to Full Tilt Poker´s contribution.

There are twelve “events” in the Full Tilt Poker Flipout Festival – each with nine tournaments being played at different buy-ins. The tournaments start within five minutes of each other and are multi-entry – so a player can enter each tournament up to three times (except for the freerolls).

Each event is at a different discipline (for example Rush, Hyper-Turbo, PL Omaha, etc) and the highlight of the series is a $55.00 buy-in Main Event, that will be played on Sunday at 2.40pm (ET) and is a No Limit Hold´em SuperStack tournament with an extra $2,000 added to the prize money by Full Tilt Poker.

The Flipout Festival gets underway at 1.00am (ET) today with a $50.00 freeroll NL Hold´em tournament, and then new tournaments within Event #1 starting every five minutes:

Subsequent “Events” start at 2.00pm (ET) and 5.00pm (ET) today, and the pattern continues over the next four days: