An incredible day of online poker is lined up for the climax of the Full Tilt Online Poker Series, culminating with the $1.5 million guaranteed Main Event. 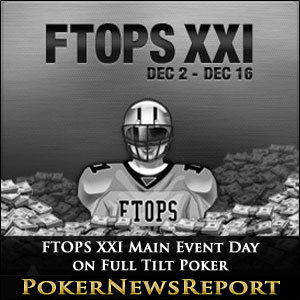 An incredible day of online poker is lined up for the climax of the Full Tilt Online Poker Series, culminating with the $1.5 million guaranteed Main Event.

It is the final countdown for the Full Tilt Online Poker Series, with the FTOPS Main Event taking place, a valuable “side” event also scheduled into proceedings, the second day of the prestigious “two-day” tournament and the conclusion of the FTOPS leaderboard competition all happening today.

The guarantee-busting series looks set to finish on a high, with players competing in the multi-entry Main Event potentially playing for more than $3 million in prize money, $600,000 up for grabs in FTOPS #34 and $1.4 million confirmed as the prize pool for FTOPS #31 at Full Tilt Poker – a possible total exceeding $5 million!

Although taking a back seat to the FTOPS Main Event, FTOPS #34 should prove to be a popular event. The tournament is a multi-entry, 6-Max, Deepstack, Knockout NL Hold´em event with a $256.00 buy-in of which $40.00 is the bounty on each player´s head. In addition to the bounties for knocking players out of the tournament, there is also a $600,000 guaranteed prize pool.

Players are allowed up to three entries into the tournament but, unlike a re-buy tournament where you can re-enter a tournament or increase the size of your chip stack when you are running a little low, each entry is played individually. If you get to the fortunate position where you might be facing yourself on the final table, your chip stacks are combined to give you an even better chance of taking down the tournament.

The cards are in the air for FTOPs #34 at 10.30am server time (3.30pm GMT – please note the earlier start time than previous FTOPS events) and late registration is available through until the end of Level 11. As levels are 12 minutes long when play commences – rising through 15 and 20 minutes as the tournament progresses – that would make the late registration period a little more than two hours.

The $1.5 million guaranteed FTOPS Main Event is also a multi-entry tournament, with players being allowed up to three separate entries into the $640.00 buy-in tournament (for players with a limited bankroll, entry is also available with a “Steps 6” ticket or through one of the last minute Main Event satellites detailed below).

The “shuffle up and deal” signal for the tournament to commence will be given at 13.30pm server time (6.30pm GMT) with late registration available for three hours (13 Levels x 15 minutes). Players who wish to take advantage of the late registration period may like to know that the starting stack is 7,500 chips and, by Level 13, the blinds are 200/400.

Based on the current number of entries for the Main Event, the last minute satellites with hundreds of seats guaranteed for the target tournament which are still to take place and the prospect of a $3 million prize pool, this game might well not be finished before Monday lunchtime!

As you might expect for the final day of the Full Tilt Online Poker Series, there are a bumper number of last minute satellites offering a guaranteed number of seats to today´s feature tournaments. Many of them do not require large buy-ins – for example the $8.00 60-player Knockout SnG for FTOPS #34 in the FTOPS lobby which also pays $2.50 for each player that you eliminate from the contest.

However, the best deal if you want to win a seat to the Knockout 6-Max is to get involved in the $55.00 buy-in multi-entry 6-Max turbo (not Knockout) which starts at 8.00am server time (1.00pm GMT). The satellite has 25 guaranteed seats to FTOPS #34 and, if you cannot play poker at that time of day without a coffee, late registration for the satellite is available for 30 minutes.

There are turbo and super turbo last minute satellites starting approximately every 15 minutes for the Main Event – offering a chance at the biggest prize of the series from as little as $26.00 buy-in and an opportunity for those who have already bought in directly to the tournament to add another entry if they wish.

The last minute satellite offering the highest number of guaranteed seats to the Main Event (25) takes place at 11.15am server time (4.15pm GMT) and is a multi entry turbo NL Hold´em tournament with a buy-in of $109.00. For those who miss this opportunity, there are satellites starting right up until 12.45pm server time (5.45pm GMT) – just 45 minutes before the Main Event begins – with five seats guaranteed!

FTOPS #31 was one of the feature events of the Full Tilt Online Poker Series – a two-day multi entry tournament with deep starting stacks, long levels and a $2,100.00 buy-in. The size of the buy-in did not dissuade 699 players from entering this prestigious tournament – creating a prize pool just short of $1.4 million and almost trebling the guarantee advertised for this event.

At the half-way stage, Anthony “holdplz” Spinella holds an eight bid blind advantage from Keith “DaMurdera3” Ferrera (whose second entry is also still alive) with a quality field stacked up behind which includes Mickey Petersen, Mike McDonald and Scott Hall. The remaining 71 players (if you count Keith Ferrera as one) are all guaranteed to cash in the event which gets back underway at 10.00am server time (3.00pm GMT) today.

A good turnout for the Stud Hi/Lo saw the $20,000 guarantee shattered as 252 players ponied up the $216.00 buy-in. “lemburg1715” from the Ukraine and “EMSBas” from the UK split the top two prizes and played on for the extra $260.00 until the early hours of the morning – when “lemburg1715” eventually wore down his opponent to claim the gold FTOPS jersey and champion´s avatar.

Kevin “-1SickDisease-“ Eyster won his second FTOPS gold jersey within a week when following up his PL Omaha heads-Up victory on Wednesday with a first place finish in the $109.00 Rush re-buy tournament. On this occasion Eyster had to overcome 766 players to win the tournament, including a final table which included Kyle Julius (2nd), Mike Leah (winner of FTOPS #28 on Thursday – 4th) and SCOOP winner Corey Burbick (8th).

Kevin Eyster´s FTOPS victory moved him up into second place in the FTOPS Leaderboard challenge, but can anybody now catch long time leader “callyoudownn”? Despite not finishing among the points in the Stud and Rush tournaments, “callyoudownn” is still alive and well in the two-day FTOPS #31 (currently in 45th) and you can be sure that he will have the maximum number of entries in the two events that start today.