Nine days down, six to go, and already more than $5.85 million has been paid out to winners in the Full Tilt Online Poker Series after yesterday´s three events. 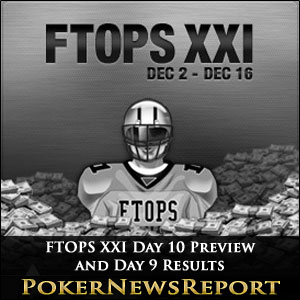 Nine days down, six to go, and already more than $5.85 million has been paid out to winners in the Full Tilt Online Poker Series after yesterday´s three events.

With the headline tournaments still to come, including the $1.5 million guaranteed Main Event, FTOPS XXI is on course to double the $7.5 million in guaranteed prize pools offered by Full Tilt Poker when the event was announced on Poker News Report last month. Although only $300,000 of that guarantee might be sidelined for today´s feature tournaments, they are three intriguing events which are sure to be fiercely competed.

Tuesday´s three events kick off at 11.00am server time (4.00pm GMT) with a $109.00 Re-buy PL Omaha Hi tournament that carries a guarantee of $150,000 (FTOPS #22). Players can re-buy every time their chip stack falls below the 1,500 chips they have at the beginning and an add-on of 2,000 is an option during the first break.  Late registration is available for the first hour (12 minute levels to start with, so until the end of Level 5), but considering the popularity of a similar PL Omaha FTOPS event last week (FTOPS #8 won by Garbally), if you leave it too late to get involved, you might get left behind.

You could say that the second event of the day is the equivalent of the WSOP Player´s Championship. The ten-discipline FTOPS #23 combines Hold´em, Omaha, Stud, Razz, Badugi and 2-7 Lowball (both limit triple draw and NL single draw) in one $535.00 buy-in event and guarantees that at least $75,000 will be distributed in prizes. This is a multi-entry 6-Max SuperStack tournament, with players having a starting stack of 5,000 chips and late registration allowed until the end of Level 20 (two hours from 14.00pm server time/7.00pm GMT). This promises to be a good tournament to rail if you cannot play yourself.

Players who want to be involved in all three FTOPS tournaments, but who do not want a late night (!), will be delighted to see that the final event of the day, FTOPS #24 is a $216.00 buy-in Super Turbo NL Hold´em Rush tournament. Players will be given just 300 chips when the cards are in the air at 17.00pm server time (10.00pm GMT) to try their best to cash in the $75,000 guaranteed tournament, for which levels last just 3 minutes and late registration is only available until the end of Level 3 – blink and you will miss it!

If you have been following the previews of the Full Tilt Online Poker Series on Poker News Report, you will be aware that we often highlight players who have come through the last minute satellites to cash in valuable feature tournaments. Yesterday “jervis333” produced the best result to date in any FTOPS last minute satellite – winning his entry to FTOPS #21 in the qualifier and then finishing 3rd in the target event for $17,383.

Today´s last minute satellites will keep you on your toes – especially as there are eight offering a total of 20 guaranteed seats to FTOPS #22. A $26.00 buy-in and a $15.00 buy-in Turbo PL Omaha tournament is schedule for 6.50amET/11.50am GMT and 7.15amET/12.15am GMT respectively, sandwiched between two $5.50 Turbo re-buy tournaments at 6.15amET/11.15am GMT and 7.45am ET/12.45pm GMT. Then there are FOUR Super Turbo PL Omaha satellites starting every ten minutes from 9.25amET/2.25pm GMT – which should give those who qualify just about enough time to late register for the target event.

There are more than thirty seats guaranteed in twelve last minute satellites to the ten-game FTOPS #23. Many of these are super turbo events in which players receive 300 chips and only have 3 minute levels, but there is one satellite schedule for 11.30am server time/4.30pm GMT which is practically similar to the target event. The $109.00 buy-in multi entry tournament still has the three minute levels, but players received a more realistic 1,500 chips to start with. There are five guaranteed seats for the target event and late registration until the end of Level 6 (only to Level 3 in the super turbos), so it may be worth your while checking this tournament out as it starts to see how much value is available.

As you might imagine, there are dozens of super turbo last minute satellites guaranteeing seats to the Super Turbo NL Hold´em Rush tournament at 17.00pm server time/10.00pm GMT – the only one which is actually a Rush satellite being the $2.15 re-buy tournament which starts at 15.05pm server time/8.05pm GMT. Those which offer the most guaranteed seats to the target events are being played at 15.35pmET/8.35pm GMT and 15.55pmET/8.55pm GMT – which both have a buy-in of $75.00 and both offer five guaranteed seats to FTOPS #24.

There seems to be a theme developing throughout the Full Tilt Online Poker Series XXI – abandon America and win a FTOPS event.

Two of yesterday´s three FTOPS feature tournaments were won by players who previously resided in the land of the free indebted. Bill “Bill Gazes” Gazes got the ball rolling with victory in the $256.00 buy-in Omaha Hi/Lo event – overcoming a guarantee-busting field of 460 (we said yesterday that this would be a popular event) to take the first prize of $19,157 after a deal was made when the tournament was heads-up.

Taylor “ambigousity” Paur continued the run of ex-pats taking down valuable tournaments in the $1,060 buy-in SuperStack 6-Max NL Hold´em event. Paur´s victory came after nearly ten hours of fierce competition between the 387 players – who virtually doubled the event´s prize pool guarantee – and after a 3-way deal was made at the final table between Paur, “Ramux” and “IITTII”.

Finally a player who plays poker from the country in which they are resident took down a FTOPS event yesterday. UK poker player Jareth “ateraaj2001” East captured the biggest prize of his online career when winning the $216.00 Turbo NL Hold´em for $28,564 in less than three hours playing time. East also agreed to a final table deal when the game went heads-up, but seeing that more than three times the guaranteed prize pool was up for grabs, a deal was hardly surprising.

An incredible sixth FTOPS cash (in FTOPS #20) saw “callyoudownn” take over at the top of the leaderboard competition yesterday. There was little movement elsewhere, with only FTOPS #13 runner up “kingkai” adding any points to his leaderboard tally to take a share of ninth position and demote “Chances Cards” out of the Top 10.