Venezuelan Ivan Freitez yesterday picked up €1.5million after winning the inaugural EPT Grand Final event in Madrid by seeing off 685 other competitors. 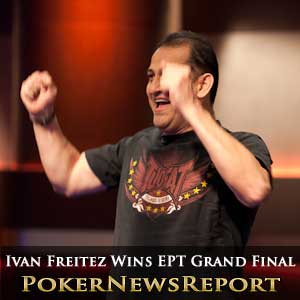 Venezuelan Ivan Freitez yesterday picked up €1.5 million after winning the inaugural EPT Grand Final event in Madrid by seeing off 685 other competitors.

Every one of the eight final table participants picked up six-figure prizes, but it was Freitez who took home the trophy and the big money.

With many observers, as well as the media, focusing on Alexandre Gomes’ attempt to become just the third pro to secure the Triple Crown of titles, the virtually unknown Freitez sprung a major surprise by taking the title in the Spanish capital city.

But the Brazilian – who had only 20 big blinds when the final table began – was unable to add to his 2009 WPT title in the Bellagio Cup and 2008 WSOP bracelet from his $2000 no-limit hold’em event success, finishing seventh after being knocked out by Los Angeles-based Russian Eugene Yanayt to ultimately leave Freitez with the top spot yesterday.

Following Gomes’ exit, Freitez, who was running hot, then disposed of four of his five opponents. The first was Yanayt, whom the Venezuelan saw off when his pocket nines held up against a pair of fives.

Freitez next sent Tamas Lendvai to the rail. The Hungarian was holding 9s-9d, but the Venezuelan’s ace-nine emerged on top to set up a heads-up clash with Brinkmann.

Following a 40-minute scrap, Freitez saw off Brinkmann in their final hand. On the button, Freitez minimum raised to 320,000 and snap called when Brinkmann three-bet shoved about 3,000,000.

Freitez – a pro who runs a transport business – showed Td-9d, but was faced with Brinkmann’s Ah-Kc. However, the Venezuelan took down the hand and picked up the first prize when the board showed 5h-2s-9d-6d-8c. A pair of nines had halted Brinkmann’s shot at glory.

Incredibly, before yesterday’s final, Freitez had only cashed in two EPT events, with 16th at February’s Copenhagen stop and 55th in the EPT Snowfest at Saalbach/Hinterglemm, Austria, in March.