Frei Dilling Kjaer leads the chip counts at WPT Copenhagen after a vicious Day 2 which saw the field reduced from 141 players to 45 in just five levels of play. 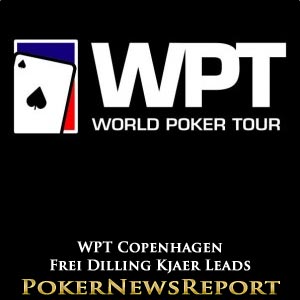 Frei Dilling Kjaer leads the chip counts at WPT Copenhagen after a vicious Day 2 which saw the field reduced from 141 players to 45 in just five levels of play.

Day 2 of the WPT Copenhagen Main Event started in much the same way as Day 1A had ended – with chip leader Andre Petrovic busting people for fun. In one of the first hands of the day, he sent EPT Barcelona winner Kent Lundmark to the rail when he flopped a straight with 10♠ 8♠ and, in the same level, eliminated back-to-back WPT Champion Marvin Rettenmaier – rivering a straight to best Mad Marvin´s pocket Fives.

However, what goes up must come down and, having built his stack up from an opening 220,000 chips to 270,000 – it all went within three levels of play. Twice he was picked off by Emil Olsson after Olsen had flopped the nuts – the second time calling Olssen´s A♥ J♥ shove on a flop exclusively comprised of hearts with 6♠ 5♥ – and, after having been told by his friend Rifat Palevic to leave the table and go cool down, Petrovic returned to donate the remainder of his chips to Christian Honore – calling Honore´s (trip Tens) river bet with just an overpair.

Honore´s good fortune (to be playing with Petrovic on tilt – not his trip Tens) catapulted him into the chip lead – but not for long. Steve O´Dwyer (J♣ 10♥) flopped trip Jacks and extracted three levels of value from Astrid Kwich (A♠ 4♠ – paired Ace) to take top spot from Sergii Baranov, who had audaciously bluffed Rasmus Neilson out of a 100,000 chip pot with 5♥ 3♥ – a hand with nothing more than potential – before Peter Jepson (A♣ 4♣) bust Ana Marquez (A♦ K♥) when making a full house to best Marquez´s trip Aces and head the leaderboard himself.

Infuriatingly, not one of Frei Dilling Kjaer´s hands was chronicled at the WPT Copenhagen Main Event but, when the chips were bagged up at the end of Level 13, Kjaer had accumulated 445,500 chips and held a narrow advantage over Peter Jepson (434,400 chips), Sergii Baranov (417,500 chips) and Steve O´Dwyer (415,600 chips). When Level 14 starts this afternoon at the Copenhagen Casino, blinds will be 12,000/24,000 with a 400 chip ante and, in addition to the four players mentioned above, the following players are also well stacked.

After the carnage of Day 2, the schedule for Day 3 is to play five levels or until just 18 players remain. The top 27 players will cash in the event and, with just 45 players alive in the tournament, it should not take long to hit the bubble. The prize up top is $229,938 and you can find out who is most likely to be taking that home with them when the climax of the WPT Copenhagen Main Event concludes on Saturday night by following Poker News Report on Twitter.