After two opening flights of Event #8 in the Borgata Poker Open series, Franco Bonacci heads a well-stack field in pursuit of his third Borgata title. 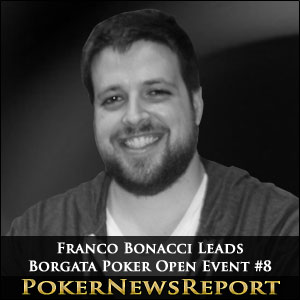 After two opening flights of Event #8 in the Borgata Poker Open series, Franco Bonacci heads a well-stack field in pursuit of his third Borgata title.

When the chip stacks were counted at the close of play of Event #8 on Tuesday morning, Franco Bonacci held a narrow advantage over Day 1A chip leader John DiBella, with the runner up in this year´s opening event – Dan Wach – handily placed in fourth.

Bonacci´s two previous victories at the Borgata have both come in deepstack events, and the “Deeper Stack No Limit Hold´em Event” (to give the tournament its full title) is scheduled to be played to a conclusion today. However, with 129 players still remaining on the event – and only 100 due to cash – the start of proceedings on Day 2 could be a slow affair.

When the surviving players take their seats at the Borgata Casino, they will be entering Level 19 (blinds 4,000/8,000 – ante 1,000). Levels remain at 40 minutes until Level 21 – when they increase to 50 minutes – and the average chip stack at the start of play will be 246,000 chips. Those with more important things to worry about than surviving the bubble include:-

Point of Interest: Orson Young is sat immediately to the right of Dan Wach on Table 15

With the “Deeper Stack” Event #8 being a two-day event, two other tournaments have finished ahead of it in the schedule.

Event #10 was the $350.00 + $50.00 buy-in Ladies NL Hold´em, won by another final table short-stack – Alyson Parker. Parker won her first event after nine previous Borgata Open cashes, and after she overcame a massive chip disadvantage in the heads-up against Grace Sun.