Hopes of a non-French victory in the Paris leg of World Poker Tour were deflated yesterday, as Franck Pepe led a 1-2-4 of home based poker players into Day 3. 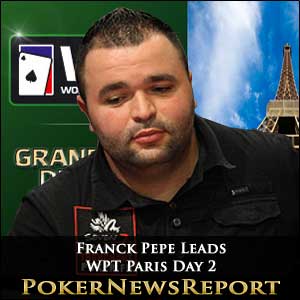 Any hopes of a non-French victory in the Paris leg of World Poker Tour (WPT) were deflated yesterday, as Franck Pepe led a 1-2-4 of home based poker players into Day 3 of the Main Event.

An eventful day´s play saw a field of 167 players reduced down to just 61 before the scheduled dinner break – at which point the tournament director could stand no more, and ordered play to be suspended for the day.

Those who had already departed at this point included 2011 WSOP Bracelet winners Jason Mercier, Max Lykov and Joe Ebanks, along with UK poker players Sam Holden, Praz Bansi, David Vamplew and John Eames. Mike Sexton had also disappeared from view after having his Aces cracked, although his conqueror in a special WPT Heads-Up challenge, Jerome Brion, was still going strong.

Lesage and Brivot stacked up early, overtaking Day 1 leaders Mikko Sundell and Guillaume Darcourt at the top of the leaderboard. They were quickly joined by Karr McLean, whose good fortune in this tournament to date was highlighted in the way he took a massive pot from Oliver Busquet. Holding 4♠ 4♣ on a flop of 4♥ 5♣ 8♥, McLean got Busquet (6♥ 5♥) to commit all his chips to the pot. The 8♦ on the turn gave McLean the winning full house, and Busquet had to watch the 9♥ dealt on the river complete his meaningless flush.