The Fox Poker Club, one of the most popular poker rooms in London, announced that it has closed down with immediate effect. 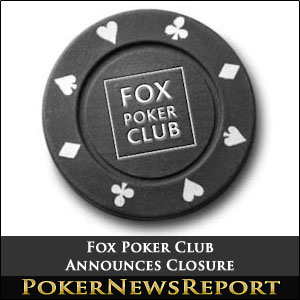 The Fox Poker Club, one of the most popular poker rooms in London, announced that it has closed down with immediate effect.

There are conflicting reports about whether the closure of this iconic poker room, operated by Genting UK, is permanent, or whether it will reopen later next year as another type of gambling venue.

The announcement on the Fox Poker Club website reads:

It is with regret that Genting UK Plc today announces that the Fox Poker Club will cease operation. The Management and Staff of Fox Poker Club would like to thank all of its customers for supporting the venture over the past two years. Further information will be released shortly.

The poker room also tweeted: Fox Poker Club is now closed, also thanking customers for their support. However, another announcement followed by Twitter saying: The club may be closed but the location will be refurbished and reborn in spring 2013 as an exciting new Genting venue. As such, it could be that Genting is closing the location as a poker room but will reopen as another type of gambling venue such as a new casino.

According to an announcement by Fox Poker Club, all funds, such as player deposits, tournament tokens and cash chips will be redeemable at the Cromwell Mint in Kensington from this week already.

The Fox Poker Club was considered one of London’s most popular card rooms, attractive due to its excellent location, good tournament mix, great service and professional management. The poker room took many years to open, with its opening date postponed on a number of occasions over the years. The poker room was finally opened in September 2010 and quickly became a favorite with locals as well as out-of-town poker fans. In January 2011, The Fox Poker Club celebrated its 10,000th member, with a good mix of players coming through its doors on a regular basis.