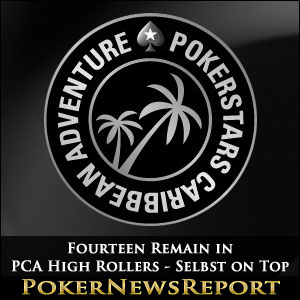 Originally, Day 2 of the PCA High Rollers tournament was scheduled to close when the eight-handed final table was set, but due to the huge number of players who registered, re-registered and late registered for the event, that was never going to happen once the final numbers were added up.

Ten re-registrations and eight last minute registrations brought the total number of entries for the PCA High Roller event up to 247 (198 unique players); creating a prize pool of $6,051,040, which will be shared by the top thirty-one players, with the winner due to receive $1,279,880.

Among the record-breaking field for the PCA High Rollers was the usual assortment of PokerStars-sponsored professionals, players with years of experience on the live poker circuit, kids with a couple of big online tournament victories and some old gits who have got more money than sense; but it was three familiar names who topped the chip counts at the end of Day 1 – Jonathan Jaffe, Ole Schemion and Daniel Negreanu.

The ten re-entries and eight late registrations joined the 101 survivors from the opening days action in Level 11 (blinds 1,000/2,000 – ante 500). Of the top three players going into Day 2 of the PCA High Roller tournament, Jonathan Jaffe crashed out before the dinner break after losing most of his chips to Paul Kuzmich´s flopped wheel, Ole Schemion flirted with the chip lead for a while before failing to make any further progress, and Daniel Negreanu moaned his way through the day despite being the fortunate recipient of some lucky double-ups.

Look Away Now if you Don´t Like Bad Beats

Day 2 of the PCA High Rollers was a day for players with tough skins. The day started off by Kyle Julius (A♥ Q♥) completing a runner-runner flush on the River to best Peter Jetten´s (9♦ 9♣) set of Nines and deteriorated from then on. Jason Lavalee (5♦ 5♣) was eliminated when Fedor Holz (A♠ K♦) spiked the A♥ on the River, Matt Waxman (A♥ 6♥) made a runner-runner straight to crush Ankush Mandavia (A♠ K♠) and Dan Smith (K♣ K♥) and Jake Cody limped into the money after his 8♠ 8♥ Turned a set to best Paul Kuzmich´s pocket Jacks.

Fate has an odd way of evening out of a period of time, and Kyle Julius paid the price for his runner-runner elimination of Peter Jetten earlier in the day by being the player to fall one short of the money – again to a bad beat. Vanessa Selbst moved all-in from the button with 7♣ 8♠ to put pressure on the two short-stacked players in the blinds – Ana Marquez and Kyle Julius. Marquez insta-folded, but Julius could not resist the A♠ K♠ he had been dealt, and he made the call.

The flop of 9♦ 5♠ 4♥ kept Julius a 2/1-on favourite to win the hand, but the 7♠ on the Turn put Selbst in front in the hand and, when the 10♦ bricked on the River, Julius was sent to the rail in thirty-second place – one spot from a $53,260 payout. A spate of unfortunate eliminations followed, with PCA Super High Rollers winner Fabian Quoss unlucky to see his paired Ace bested by Daniel Negreanu´s rivered set of Sixes, Negreanu again getting lucky when his A♥ Q♦ caught a Queen to bust Ami Barer (A♠ K♣) and Chris Klodnicki departing in seventeenth place to Marvin Rettenmaier´s rivered flush.

Selbst Moves to the Top of the PCA High Rollers

During the ten levels of action that were completed on Day 2 of the PCA High Rollers, Vanessa Selbst had been quietly making ground on the chip leaders. A poor start (9♦ 9♠ < Myro Garcia´s K♦ K♥) had seen Selbst slip to 140,000 chips; but she soon recovered in a three-way pot against Robert Mizrachi and Fabian Quoss and, while the majority of the players were keeping one eye on the bubble, chipped up prior to eliminating Kyle Julius in the hand featured above.

Another big hand against Chris Klodnicki with pocket Kings took Selbst beyond the 1.5 million chip barrier, and she would have been heading into the final day of the PCA High Rollers tournament with a more substantial chip advantage if she had not doubled-up Aleksandr Denisov in the final hand of the night A♥ 8♠ < A♦ K♣.

Looking Ahead to the PCA High Rollers Final Day

When play recommences at the Atlantis Resort in the Bahamas, the fourteen remaining players will be entering Level 21 (blinds 10,000/20,000 – ante 3,000). Vanessa Selbst will be aiming to repeat her success in this event last year, but will face stiff opposition from WSOP Main Event champion Greg Merson, WPT Champion Marvin Rettenmaier and GPI Player of the Decade Daniel Negreanu, who needs to finish in fifth place or higher to recover the losses he made in the Super High Rollers Event last week.