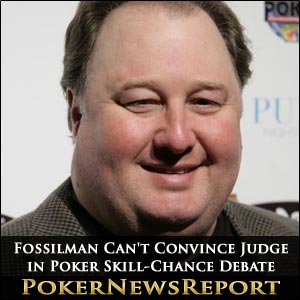 Greg “FossilMan” Raymer, the 2004 World Series of Poker Main Event champion, testified in a circuit courtroom in Virginia last week, providing the court with a demonstration intended to show that poker was a game of skill more than chance, but the judge didn’t buy his argument and ruled that poker is a game of chance.

Judge Thomas Shadrick, in making his ruling after the trial that lasted almost a full day, admitted that poker does involve skill and that better players are more likely to win than less-skilled players, but the outcome of poker hands are uncertain and are more subject to chance.

The city of Portsmouth had developed a reputation as a haven for [geolink href=”https://www.pokernewsreport.com/online-poker-rooms”]poker rooms[/geolink] for a four-year period beginning in 2006, including the Poker Palace operated by Charles Daniels. When Commonwealth Attorney Earl C. Mobley shut down the Poker Palace and about half a dozen other poker rooms in the city for illegal gambling, Daniels filed a lawsuit in 2010. In closing down the poker halls, Mobley had admitted that the state’s gambling law was imperfect, but didn’t want Portsmouth to become the state’s center for gambling.

Daniels, also the operator of a bingo hall fully-licensed in Virginia, Boulevard Bingo, was supported in the poker case by Poker Players Alliance (PPA), an organization based in Washington that supports and works toward the legalization of poker at both the state and federal levels. The group brought in Raymer, who is a PPA board member, and conducted research to back Daniels’ argument that No Limit Texas Hold’em, is, by and far, a game requiring skill and not illegal gambling.

Virginia law recognizes illegal gambling as wagering something of value on a chance to win something of value in a contest, of which the outcome is uncertain or a matter of chance. There are certain exemptions to some types of gambling, bingo, for instance.

Raymer, a patent attorney prior to discovering that professional poker was more to his liking, gave a 15-minute demonstration to the court emphasizing the things a player needs to know and do to increase his chances of winning. Among the skills in a successful player’s arsenal are the ability to calculate and determine various kinds of odds instantaneously, the capability to read the body language of opponents and to hide or subdue your own, the talent to predict the strategy of other players and to anticipate their future moves. Raymer’s instructional lesson to the judge and court spectators was free. However, for Virginia’s No Limit Texas Hold’em players, the stakes were extremely high.

Another argument made by Daniels’ attorney, Marvin Miller, was that Virginia’s gambling law was too vague. Miller insisted that the state law could reasonably be applied to placing bets on farm commodity futures, which are considered wagers of an unknown nature. Miller also stated that state legislators’ attempts to clarify the legality of poker were always tabled in Richmond but had never been outright killed.

Maybe they’re waiting for a decision like yours, Miller said to the judge, implying that lawmakers were waiting on a judge’s ruling before acting on legislation.

Shadrick said that the current law wasn’t unconstitutionally vague and that a person with normal intelligence could certainly understand it. Shadrick’s ruling against the game of skill argument ended Daniels’ quest to reconvene the charity-driven cash games and tournaments that proliferated in Portsmouth just a couple of years ago. Daniels’ said in the lawsuit that his poker hall had donated in excess of $700,000 to charities, which was 74 percent of the Poker Palace’s revenue. Beneficiaries of the donations included the March of Dimes, the Fraternal Order of Police, the Portsmouth Catholic Regional School and the Chesapeake Sheriff’s Office Charities.

Daniels was unsure about appealing the judge’s decision. However, poker insiders believe that the skill-chance debate is far from over and will certainly be argued in higher courts and at the federal level in the future.