The format and timeline for the forthcoming Global Poker Masters on March 21st and 22nd has been revealed by the organisers, the Global Poker Index. 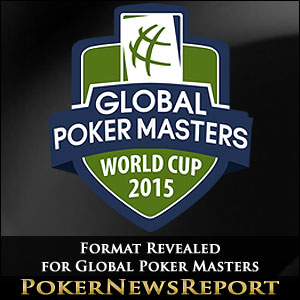 The format and timeline for the forthcoming Global Poker Masters on March 21st and 22nd has been revealed by the organisers, the Global Poker Index.

The Global Poker Masters – or the “World Cup of Poker 2015” – will see eight international teams of poker players battling it out at the Hilton Portomaso in Malta on March 21st and 22nd for the bragging rights of being world champions.

With the exception of Team USA, all five players in each of the other seven teams have been confirmed, and the Global Poker Index has just revealed the structure of the event and the timeline over which it will be played.

Day One – Time to Get an Advantage

Day One is going to be a very busy day. The teams will compete in five x five rounds of 8-Max sit n go games being played simultaneously in Phase 1, so that every player gets to compete against every other player from the seven opposing nations.

Day Two starts with the teams that are placed second to seventh squaring up in a series of heads-up matches. Each heads-up match in Phase 2 is “best-of-three” games, and the team with the lowest points total after the heads-up round has been concluded will be eliminated.

The six remaining teams then compete in a 6-Max sit n go (Phase 3) to determine the Global Poker Masters finalists. When only two players remain at the 6-Max table, the remaining players from those teams will rejoin the game to compete in five heads-up matches. The team that wins the most heads-up matches in Phase 4 will be crowned the winners.

Each of the eight teams was originally supposed to contain the top five players in their country´s Global Poker Index ranking but, due to other commitments, sponsor´s objections and travel issues, the teams will have a slightly different line-up than was originally envisaged.

The Global Poker Masters is one of series of poker-related events that will be taking place towards the end of the month in Malta. In addition to the first ever EPT Malta, poker players and industry leaders will be heading to the Mediterranean island for the European Poker Conference and European Poker Awards ceremony.

GPI owner, Alexander Dreyfus, initially said that an online award was not an option because it was “difficult to have a global vision of nicknames” and because there was a lack of accuracy in collating results from jurisdictions with different domains.

However, Dreyfus changed his mind when he was reminded that the Global Poker Index has an information sharing agreement with Pocket Fives, who could provide sufficient data to identify the leading online players and their performances.

Players who are stuck behind their computers during the Global Poker Masters can follow all the action as it will be live-streamed via Twitch.