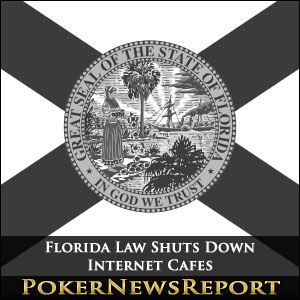 The investigation led to the arrests of 57 individuals on racketeering and money laundering charges amid allegations that the cafes were illegal online gambling dens. All 57 arrested were tied to Allied Veterans of the World, which operated the cafes and were found to be heading the $300 million operation.

Allied offered a number of online gaming options at its cafes, including slots and online poker. The revenue generated was supposed to find its way to charities that benefited veterans, but instead landed in the pockets of cafe owners and operators. Former Lieutenant Governor Jennifer Carroll, who acted in a public relations capacity for Allied Veterans, resigned from her state position when the investigation became known to the public. She hasn’t been charged with any crimes.

The Internet cafes had been operating under a law that permitted the offering of sweepstakes as promotions. The cafes were quite popular as social gathering places for the state’s many retirees. Recent estimates concluded that the new law will eliminate roughly 14,000 jobs and close to 1,000 businesses. Also, legitimate businesses such as restaurants operating near the cafes stand to lose revenue from the closings, Reuters reported.

Legislators rushed passage of the law through once the allegations surfaced. The state House quickly signed off on the bill, followed by approval by the Senate Rules Panel. Gov. Scott wasted little time in affixing his signature, telling reporters that the crackdown on illegal gambling was the right thing to do considering the results of the investigation. Only about 2% of the $300 million actually went to programs for veterans.

The law was met with a considerable amount of opposition. The Florida Adult Arcade and Bingo Association staged a protest that saw many senior citizens demonstrating their displeasure with the bill in front of several Tallahassee Internet cafes.

The new statute does not bode well for the prospects of online poker and gambling legislation in the state of Florida. Most lawmakers will not be eager to consider such proposals in light of the Allied Veterans scandal that prompted them to shut down the cafes.