The final starting flight of the WSOP Main Event is now over and Mark Kroon is the man at the top of the chip ladder. 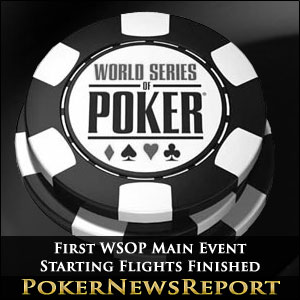 The final starting flight of the WSOP Main Event is now over and Mark Kroon is the man at the top of the chip ladder.

Kroon took the chip lead from Imari Love after the last hand of Day 1c after Love had it for the majority of the day. It came as Kroon won a hand on a 5♦ 9♣ 8♦ 6♥ 4♦ board with A♦ 7♦, which gave him a nut flush on the river after hitting a straight on the turn. He also knocked renowned poker pro Ylon Schwartz out of the event after Schwartz went all in after the river

The chip leader will return to the Main Event with 246,300 chips to his name, which is over 30,000 chips more than Love, who finished the last starting flight with a stack of 214,300. Kroon will have no shortage of competition going into the rest of the event, however, with high levels pros such as Antonio Esfandiari, Gus Hansen, Michael Mizrachi, Phil Hellmuth and Phil Ivey advancing into the next phase of the tournament

Ivey had a fair good day on the felt, ending Day 1c with a stack of 119,650 chips, which puts the Tiger Woods of Poker in a solid position going into the next day of play. Michael Mizrachi also had a great start to this year’s Main Event, ending the day with 176,100 chips to his name.

Spanish football star Gerard Piqué traded the ball for the cards as he took part in the third starting flight, and he showed that he is more than just a football player. The FC Barcelona centre back finished the day with 19,400 chips, which was good enough to see him through to the next phase of the competition.

Piqué managed to double up just before the end of the night after winning a hand against Harald Olsen. Piqué went all in on the turn of a board that showed 3♦ 6♦ {K} 3♥ with A♦ J♥, which gave him a nut flush draw.

He needed to hit if he was to stay in the event since Olsen had Q♦ Q♠ and he was not about to fold them. Thankfully for the Spaniard, the J♦ showed on the river, which gave him the flush he was after to give his stack a much needed boost.

Members of the first two starting flights will be back in force tomorrow as Days 2a and 2b get under way at the Rio in Las Vegas.