Vasily Firsau benefitted from an astonishing day´s action to have more than half the chips in play as the WPT Grand Prix de Paris reaches its final table. 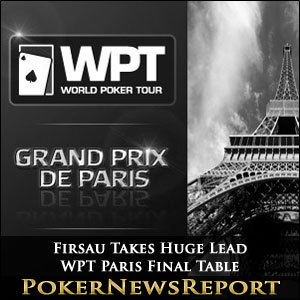 Vasily Firsau benefitted from an astonishing day´s action to have more than half the chips in play as the WPT Grand Prix de Paris reaches its final table.

Twenty-four players returned to the Aviation Club de Paris yesterday for the penultimate day of the WPT Grand Prix de Paris Main Event, with three players still to be eliminated before the money bubble was to burst.

At the end of the day, the chip leader going into the climax of the tournament is Belarus poker player Vasily Firsau, who chipped up to three times the average chip count with a string of valuable eliminations toward the end of the day.

When play recommenced at the Aviation Club de Paris, blinds were 2,500/5,000 (ante 500). Several players achieved valuable double-ups during the first hands of Level 17, and it was surprisingly David Hu – who had entered the day in fifth position – who was to leave the tournament first. Hu doubled up Gjergj Sinishtaj 7♣ 7♥ > A♣ K♣ before Sinishtaj completed Hu´s misery by busting him out in twenty-fourth A♦ K♥ > A♠ Q♦ when Hu tried to double back.

The short-stacked Eldos Davlet was bust in twenty-third by Kimmo Kurko before Jonnie Sonnelin got his last 60,000 chips into the middle with A♣ K♠ and was called by Jason Koon (A♠ Q♣). Sonnelin looked good to double up before the Q♥ was dealt on the flop, and he was eliminated in twenty-second – much to relieve of the remaining 21 players who were now assured of a $20,250 min-cash.

With the bubble bursting, many players took chances they may not normally in order to get among the chip leaders. Byron Kaverman – who had recovered from being down to 5,000 chips on Day 2 – took a chance with 10♦ 9♦ and was bust by the pocket Nines of Matt Salsberg, while pocket Nines were no good for Ville Mattila, who called a shove from Victor Choupeaux (A♥ K♠) and was bust from the WPT Paris Main Event on sixteenth place when the K♣ was the first card out on the flop.

Kara Scott blew her tournament life when she ran her A♠ 6♠ into the A♦ A♥ of Peter Apostolou and Vasily Firsau became the first and only player to break through the one million chip barrier when eliminating Jason Koon in thirteenth place A♣ Q♥ > K♦ Q♦. As the remaining players converged onto two tables, last year´s WPT Grand Prix de Paris winner Matt Salsberg was eliminated in twelfth (A♥ K♠ > 10♠ 10♣) by Victor Choupeaux, and the last Party Poker representative – Marvin Rettenmaier – finished in tenth when his A♦ 6♥ failed to improve past Mohsin Charania´s A♠ J♣.

Vasily Firsau took control of the WPT Grand Prix de Paris as the tournament resumed after the dinner break. He eliminated Victor Choupeaux in ninth position Aces > Kings and Ali Mekhtoub in eighth 9♣ 9♥ > A♣ 10♦ to finish the day with 2,893,000 chips, while Christina Lindley moved into second place on the leaderboard when she bust Bernard Guigon in seventh A♥ K♦ > A♣ Q♦ to set the six-handed final table that will resume at 3.30pm (CET) today.

When the final six players take their seats at the Aviation Club de Paris this afternoon, they will be approaching the end of Level 22 (blinds 8,000/16,000 – ante 2,000). Vasily Firsau is obviously the man to catch but, with Peter Apostolou and Kimmo Kurko needing to chip up quickly to remain competitive, it could be a very interesting final day´s action at the WPT Paris Main Event.