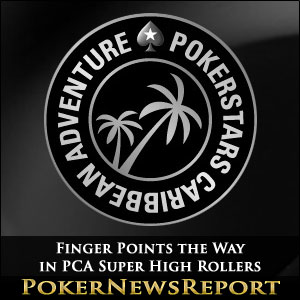 The PokerStars Caribbean Adventure 2014 kicked off yesterday at the Atlantis Resort on Bahamas´ Paradise Island, and the first event on the schedule of events was the $100,000 buy-in Super High Rollers tournament.

The unlimited re-entry tournament attracted some of the most recognisable names in poker, including “player of the decade” Daniel Negreanu, WSOP Main Event winner Ryan Riess and Bertrand “ElkY” Grospellier.

All of the afore-mention players concluded Day 1 with zero chips (Negreanu bust out twice) but, with re-entries and late registration open until noon today, we may still see three of the most irritating players in the world competing for PCA Super High Roller glory by the close of Day 2.

Recap of the Day 1 Action

With blinds starting at 500/1,000 (ante 100) – and players receiving 250,000 chips in their starting stacks – there was little notable action within the first couple of 60- minute levels, until Ole Schemion (A♣ A♠) flopped a set of Aces against Philipp Gruissem and got three streets of value against his compatriot to be the first player above 400,000 chips.

Pocket Aces were to play a significant role in the day’s proceedings, particularly for Antonio Esfandiari – who saw his Aces cracked by Jason Koon (A♥ 4♦ > A♦ A♣), then cracked the Aces of Dan Shak (A♣ 10♠ > A♠ A♦) before being bust out of the PCA Super High Rollers by Dan Shak Q♦ Q♣ > A♠ A♣ when the Q♠ spiked on the River.

Max Altercott busted out John Juanda with A♦ A♥ before eliminating Mike Watson A♣ K♥ > 8♦ 8♥ to move into a significant chip lead mid-way through Level 7, and he held that lead until Martin Finger bust out Keith Lehr in the final level of the day to nick the chip lead when the chips were bagged and tagged.

Looking Ahead to Day 2 of the PCA Super High Rollers

Forty-five players entered the PCA $100,000 Super High Rollers tournament – seven of them twice on Day 1 – to create a total entry of fifty-two. That number looks likely to increase further, as John Juanda and Daniel Negreanu have both indicated that they will fire further bullets before play gets underway on Day 2.

When the players take their seats for Day 2 at the Atlantis Resort on Paradise Island they will be entering Level 11 (blinds 5,000/10,000 – ante 1,000) and therefore Juanda, Negreanu and any other late-comers will have 25 Big Blinds to play with in their attempt to score a cash in the opening event of the PokerStars Caribbean Adventure.

Thirty-seven of the forty-five unique entries survived Day 1, with the top ten players on the PCA Super High Rollers leaderboard having the following chip stacks: