The six-handed final table has been set in the WPT Korea Main Event, with Chane Kamapanatsanyakorn holding a narrow chip advantage over Masato Yokosawa. 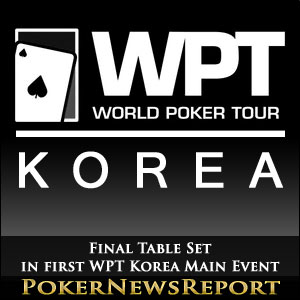 The six-handed final table has been set in the WPT Korea Main Event, with Chane Kamapanatsanyakorn holding a narrow chip advantage over Masato Yokosawa.

137 players ponied up the $3,000 buy-in to compete in the first-ever World Poker Tour Korea Main Event at the Ramada “Club Phoenix” Casino on the island of Jeju and, after two opening flights, a frantic Day 2 and a rapid Day 3 just six players remain.

At the head of the chip counts is Chane Kamapanatsanyakorn – a player from Thailand who has already featured on a couple of APPT final tables this year, and who made a deep run in the WSOP Asia Pacific Main Event won by Daniel Negreanu in April – finishing in 18th place for A$25,778.

Kamapanatsanyakorn Burns a Trail from the Start

Kamapanatsanyakorn entered Day 3 of the WPT Korea Main Event second in chips behind Jae Kyung Sim, but enjoyed some significant good fortune as the 21-player bubble burst – rivering the 8♥ to crack Zhang Jian´s Aces 8♠ 8♦ > A♥ A♦ and send Jian to the rail in twenty-first place, before finding the K♦ on the Turn to bust Liu Chun Jie in twentieth place K♣ 10♣ > 6♥ 6♣.

Masato Yokosawa had a real roller-coaster of a day – doubling up on the fringes of the bubble 9♠ 9♣ > A♥ 9♥ against overnight chip leader Jae Kyung Sim, before being crushed to just 4 big blinds when Wang Kun (Q♥ J♥) flopped an Ace-high straight to crack Yokosawa´s (A♦ A♥) flopped set of Aces.

Further K.O.´s of Yuri Ishida in thirteenth when Yokosawa flopped set of Jacks to beat top pair and top kicker, and Takashi Ogura in eighth Q♥ J♣ > A♦ 10♣ – when he rivered a Queen to prevent his stack from being crippled – enabled Masato Yokosawa to finish the day second on the leaderboard with 932,000 chips.

Kosei Ichineese had started the day with just 19 big blinds (97,500 chips), but like Masato Yokosawa (above) enjoyed a double-up on the fringes of the bubble (10♣ 10♥ > A♣ K♦ against Jason Park). That is pretty much where the comparison between the two players ends.

Ichineese was responsible for the elimination of Narutoshi Otsuka in 15th place A♣ Q♦ > 5♣ 5♥, and temporarily moved into the chip lead when busting out Chong Xian Yang in eleventh place J♣ J♥ > 10♣ 10♥ and forcing Jae Kyung Sim out of a valuable pot when the ten remaining players congregated around one table.

Kosei Ichineese would have undoubtedly been the overnight chip leader going into the climax of the WPT Korea Main Event had he not lost a substantial pot to Chane Kamapanatsanyakorn (K♣ 9♣ – rivered a flush draw) and doubled-up Hyunshik Hun A♥ 10♠ > 4♦ 4♠ just before the close of play.

The final three seats at the WPT Korea final table will be occupied by Jae Kyung Sim, Chris Park and Hyunshik Hun – who, with almost 25 big blinds after his late double-up against Kosei Ichineese is more than just making up the numbers.

Sim seemed to be the player that everybody wanted to take on during the penultimate day of the WPT Korea Main Event, but he managed to maintain his chip stack throughout most of the action – drawing the play on Day 3 to a close when eliminating last-woman-standing Asaka Matsunaga in seventh place 9♣ 9♦ > A♠ Q♥ (Doh!).

Chris Park also sealed his place at the final table in dramatic fashion, busting both Dong Sheng Peng (K♣ Q♠) and Jun Saito (A♣ K♥) in ninth and tenth places respectively when his pocket Aces held on a Nine-high board.

Looking Ahead to the WPT Korea Final Table