The Spanish – who have never had an EPT Main Event winner – are gradually taking over the feature tournament in the Barcelona leg of the European Poker Tour. 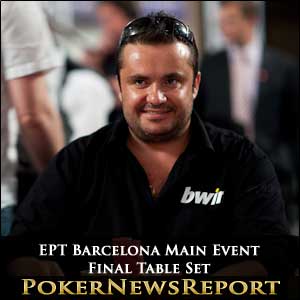 The Spanish – who have never had an EPT Main Event winner – are gradually taking over the feature tournament in the Barcelona leg of the European Poker Tour.

From only having one player in the top ten chip counts at the start of Day 2, they increased their presence to two players on Day 3 and now have four players on the eight-seat final table of the event – and almost three-quarters of the 33,925,000 chips in play.

Overnight chip leader is Tomeu Gomila, who extended his lead early in the day taking a monster pot from PokerStars pro Eugene Katchalov when his A♥ 10♥ hit a board of 5♦ A♣ J♣ / K♦ / Q♣ for the straight. Later in the day Gomila eliminated the other remaining PokerStars pro – Matthias de Meulder – when he rivered the K♠ to pair his K♥ 7♥ and bust de Meulder´s A♦ 10♣

Saar Wilf has been hanging around the top of the leaderboard for several days, and yesterday he cemented his place on the final table by first eliminating Mikel Allende when hitting trip Kings in a K♣ 2♦ versus A♠ 7♦ race, and then busting Sigurd Eskelund with A♥ A♣ against the Norwegian´s A♦ 9♣. Wilf was also responsible for taking out the last qualifier standing – Marcos Fernandez in 13th – when his A♦ 7♦ proved too strong for Fernandez´s 7♠ 6♠.

Raul Mestre, who had been chip leader for most of Day 3 and was second to Gomila when play started on Day 4, also had a good day. Twice in the early exchanges he out-bet Juan Manuel Perez to take valuable pots without going to showdown, and was to reduce Perez to his last million chips late in the day when hiss 6♣ 6♦ managed to hold on against Perez´s A♦ K♠.

Isabel Baltazar Clemente is a professional restaurateur from the Bordeaux region of France. Although she has limited live poker experience (her best results to date are third place in a €500.00 Partouche side event and sixth place in a €600.00 tourney in Spain) she is not fazed by appearing on the final table, and stated in an interview last night that she aims to last as long as possible and remain true to her solid style of play.

Two big hands helped Isabel towards her seat at the final table. First she risked her tournament life with 9♦ 9♠ against Saal Wilf´s A♥ K♥, and then practically doubled up again when her Q♣ Q♠ eliminated Italian Massimilano Martinez (J♦ J♥) on a board which ran Q♦ 9♣ 7♣ / K♣ / 2♣. Isabel will start the final day in fourth position.

None of the eight remaining players are out of the game just yet. With the blinds at 25,000/50,000 (ante 5,000) even short-stacked Eugene Katchalov is optimistic of a better finishing position than he currently commands. The Ukranian/American could become the next player to win the Triple Crown (WSOP/WPT/EPT) and feels that although is down to his final 14 big blinds, could still “run up” if he catches a good hand early on.