The final table has been set in the $1 Million Guaranteed Event #10 of the Borgata Poker Open, with Dan DiZenzo leading the race for the $168,875 first prize. 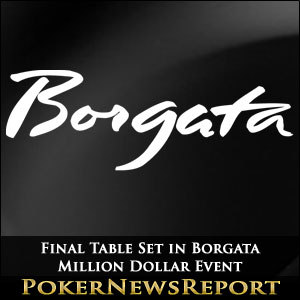 The final table has been set in the $1 Million Guaranteed Event #10 of the Borgata Poker Open, with Dan DiZenzo leading the race for the $168,875 first prize.

There was another long, crazy day of action at the Borgata Casino yesterday when 392 players returned for Day 2 of the $1 million guaranteed Deepstacks Event #10. With only 250 players cashing in the event, the early action was “red button madness” as short-stacked players risked all to get into the money.

Incredibly the field was reduced to just 252 players after ninety minutes of action, and the bubble burst thirty minutes later when Matt Lombardi´s pair of Kings held against an opponent who had moved all-in with A♠ 5♥. The crazy sequence of action continued for several levels more as players risked their tournament lives for a better finishing position, and by the dinner break just forty five players remained.

The Fate of the Chip Leaders

Going into Day 2 of Event #10 Dan Heimiller had performed best of the Day 1 players (there had been five opening flights) and had taken 651,000 chips to the table. Heimiller however did not enjoy the best of fortunes throughout the opening levels, and crashed out in 149th place for $971 – a net loss of $1,829 after firing seven bullets in the event!

Another player who was also unfortunate to crash out earlier than he deserved was Coleem Chestnut. Chestnut had been second in chips overnight, but during hand-for-hand play he was crippled by Edward Pham 10♥ 10♦ > 9♦ 8♦ after Chestnut had flopped two pairs, but Pham completed an open-ended straight draw on the River – Chestnut bust in 239th place for $815.

In third place at the start of play was Dan DiZenzo, and he enjoyed all the good fortune that eluded Heimiller and Chestnut throughout the day – particularly in one hand prior to the dinner break when he had called the shoves of two opponents (Q♦ Q♣ and 2♣ 2♠) with A♦ 10♠. The player with Queens was looking good to triple up after the flop and Turn of 5♠ 6♠ J♦ / 8♠, but the A♣ spiked on the River to send DiZenzo off to a healthy lunch with an even healthier chip stack.

The Brakes Go On after Dinner

Forty-five players returned from the dinner break at 8:30pm, and it took almost six hours to reduce the field to a final table of ten. During this period, Frank Panetta built a commanding chip lead when busting Greg Joslyn in twenty-fourth place A♦ A♠ > K♦ K♠, but Panetta was restrained from running away with the tournament by Danny Sulejman K♦ K♥ > K♠ J♠ as the final two tables approached.

One player whose chip stack was headed in an upward direction through the last few levels of the night was Esther Taylor. Taylor – the last woman standing – had struggled with a below-average chip stack for most of the day, but virtually sealed her seat at the final table when doubling up in a massive pot against Peter Hong 10♦ 10♥ > A♦ Q♠. Taylor – who will undoubtedly have the loudest support on the rail tonight – could have been closer to the top of the leaderboard but for doubling up Matt Stout K♦ 7♦ > 5♥ 5♣ when the board produced two pairs and Stout won the hand courtesy of his superior kicker.

Stout´s good fortune did not last much longer, and he was bust in fifteenth place – after which it took some incredible hands to reduce the field to just ten players. William Sanders hit runner-runner Quad Tens to eliminate Randy Page, Matt Lombardi bust to Menan Saydam´s 4-9 offsuit after Saydam flopped trip Nines (Saydam later confessed he had to make the call because the 49´s are his favourite football team) and Lyle Diamond was out-kicked by Sergio Vigano (A♦ J♣ > Q♦ J♦) to leave the tournament in twelfth place.

We mentioned earlier how Dan DiZenzo had enjoyed considerable good fortune throughout the day, and no more was it shown than in the last couple of hands of the night. DiZenzo found himself all-in and at risk with A♥ 6♣ against Scott Blumstein´s A♣ 9♦. Fortunately for DiZenzo the 6♦ was dealt on the flop and he was able to double up.

In the very next hand, Scott Blumstein moved all-in. Dan DiZenzo made the call and the cards were on their backs:

The hand could have gone to either player after the flop of K♦ Q♦ 10♠ and Turn of 6♦ (pairing Blumstein´s Six), but DiZenzo´s pair of Nines held – and he moved up to the top of the leaderboard, while Scott Blumstein hit the rail in eleventh place.

When play resumes at the Borgata Casino at 3:00pm this afternoon for the live-streamed final table of Event #10, ten very tightly matched players will be facing blinds of 120K/240K (ante 30K). The next player to leave the tournament will receive the respectable sum of $9,708 for finishing in tenth place, but thereafter massive pay jumps go all the way up to the first prize of $168,875.