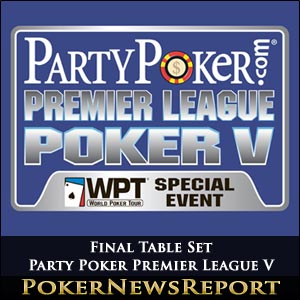 The final table is set for the $125,000 buy-in Party Poker Premier League V and young UK poker player – Matt Frankland – goes into the finale of the event with the biggest stack of chips having performed best during the semi-final stages.

Half a Million and a Chair up for Grabs

The winner of the Party Poker Premier League V not only picks up a first-place cheque for $500,000 but also a seat for the $25,000 WPT Championship at the Bellagio in May. Last year the Bellagio event was worth $1.6 million to winner Scott Seiver, who also qualified for the final table of the Party Poker Premier League V by finishing third in Group B. Matt Frankland, Phil Laak and Scott Seiver will be joined at the final table by other semi-final qualifiers Daniel Cates, Sam Trickett, Patrik Antonius, Tony G and Tom Dwan in what promises to be a highly entertaining finale to this prestigious event.